Every team needs a player to step up and lead, making tough decisions on the pitch that’ll ultimately decide whether you win or lose a match. In Madden 22, it’s no different, and upon booting up the game’s Ultimate Team mode for the first time, players face a difficult choice of deciding who to make their Madden 22 team captain.

It’s a big decision to make too – Madden 22 team captains come with a whole host of benefits, including an enormous team chemistry boost to help get your team off the ground. They’ll also be one of the highest rated Madden 22 players on your team to begin with, since each Madden 22 team captain is rated 85 at launch, but will be upgraded to a rating of 89 in time.

But who should you pick to be your Madden 22 team captain and why? Well, read on to find out. Here’s everything you need to know about the four men vying for your MUT patch, including their stats, traits, and more.

In Madden 22, you have the option of picking one of four team captains. These are:

You’ll receive these players in a Fantasy Pack once you’ve completed the preseason and campaign program up until week four. From there, you’ll have the chance to pick one of the four players, who all possess different traits. These players are all rated 85 initially, but can be upgraded over time for five training points.

While you can switch to another captain mid-season, it is worth considering what they bring to the table as they’ll have a drastic effect on how your team plays come matchday. 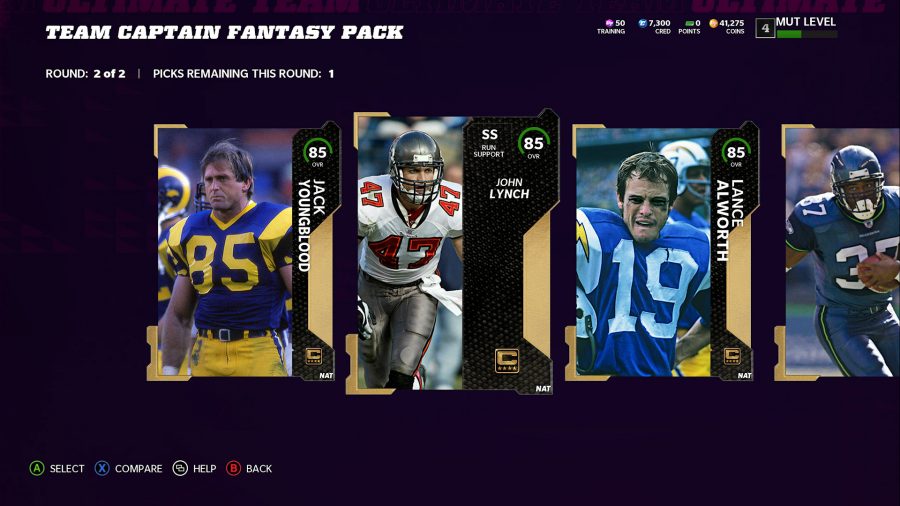 So with all that in mind, who is the best Madden 22 team captain? Well, for us, it has to be John Lynch. The Super Bowl champion has great base stats across the board and will be an absolute pain for attacking sides. While he’s not as good as fellow strong safety Kam Chancellor, who’s this year’s Ultimate Champion, he’s the strongest Madden 22 team captain from this list.

Lance Alworth comes in at a strong second, simply due to his impressive running and catching stats and overall pace – perfect for a wide receiver.

The other two potential captains are good on paper – but unless you’re planning on playing a more defensive game or you’re a huge Seattle Seahawks fan, then we just can’t advise picking Youngblood or Alexander.

So there you have it – John Lynch is the best Madden 22 team captain.