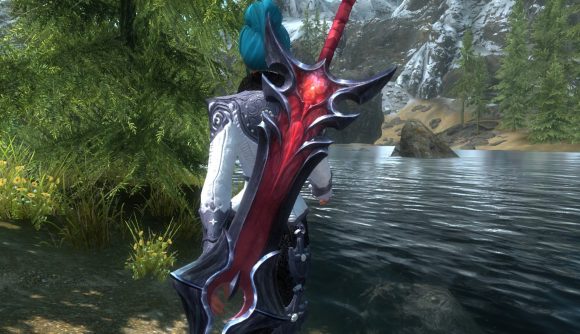 Let’s face it, League of Legends and Skyrim aren’t alike in the slightest. One is a massive RPG set in a nordic state with a civil war going on, and the other is one of the most successful MOBAs in the competitive scene. But if you were going to say there was a similarity or two, it may be in the weapons and swords.

Modder Lime1Light is obviously a fan of both games decided to combine the two games, even if just a little, in the form of this Aatrox sword mod. The images are pretty epic, the dark metal highlighted by the red glowing heart of the sword and it fits right into the Dragonborn’s world. We just hope that Aatrox isn’t missing it too much, we don’t want him coming after us – stay in Runeterra, please, Skyrim doesn’t need any more monsters.

To create the mod Lime1Light says they used textures found on the official League of Legends website which explains why the Skyrim version looks so similar to the original. Of course, they also needed a little Photoshop to get it up to Skyrim scratch, but the result is mightily impressive.

You don’t get the sword right away though, you have to craft it out of components you can find around the world. Collect four creep cluster roots, four ebony ingots, a briar heart and a couple of leather strips to craft the sword, and don’t forget the ebony smithing perk too.

If you want to try out the mod for yourself you can find the regular edition here, and the special edition here. They’ve also made a bunch of other League of Legends weapons in the past which are on Lime1Light’s profile. However remember downloading stuff from the internet can be dangerous, so always be careful when downloading mods.