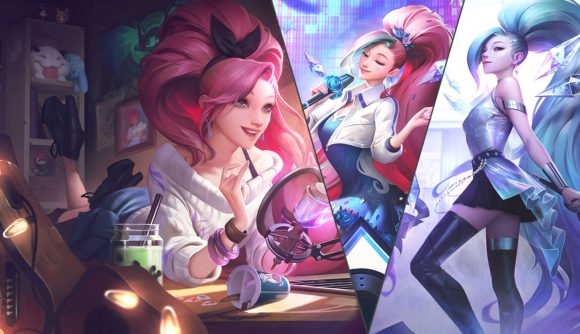 In a widely-shared Medium post, a woman called Stephanie alleges that League of Legends’ pink-haired pop star, Seraphine, could be based on her. The post details a brief relationship she had with a former Riot employee in early 2019, who she feels might have used specific details of her life and likeness as inspiration for the character’s design.

Stephanie believes that her name, drawings, cat, hair colour, eye colour, face shape, and where she’s from line up “very closely” with Seraphine’s design and backstory. She backs up her claims by drawing comparisons between pictures of herself, her art, etc, and artwork of the character.

Stephanie says that ‘John’, an alias she uses to hide the former Riot worker’s identity, “flat-out” told her that he suggested an “e-girl” or “awkward” Ahri skin to his co-workers that was inspired by her. She alleges that he also claimed to be “partially involved” with K/DA’s skins.

Riot has now denied the allegations in a statement made to Inven Global, sharing that ‘John’ left the company over a year ago and asserting that Seraphine is its own creation and “was not based on any individual”. This, however, runs counter to a tweet made last month by Jeevun Sidhu, a senior game designer at Riot, who thanked his girlfriend and fellow Rioter, known online as Riot Whiskies, for inspiring Seraphine’s personality. Riot Whiskies has even cosplayed as the character.

In 2019, I had a relationship with a Riot employee. He’d joke about making content based off me. We stopped talking after a few months, I had no hard feelings and largely forgot about things. [2/?] pic.twitter.com/OYK0OoxMDu

Riot also stated that ‘John’ “was in a department and role that has no input whatsoever into the creative design process.” Stephanie does state that he wasn’t a character or skin designer, though his influence over such matters remains in contention.

Janelle Wavell-Jimenez, a former Riot product manager and producer for in-game cosmetics, commented on the situation, saying: “Having been a lead on skins, but no longer at Riot: no one on the champ/skins team would take a random Rioter’s love interest and use that as a basis for a million dollar business decision.”

Regardless of whether or not the myriad similarities are coincidental, the situation has clearly affected Stephanie, who says she’s found it “really violating”. She adds that strangers online have been pointing out how much she looks like Seraphine and mentions that she hasn’t played League of Legends since the character’s release.

Riot has confirmed to Stephanie’s attorney that, in its view, “her claim of being the basis for Seraphine lacks merit”. The company is awaiting a response.