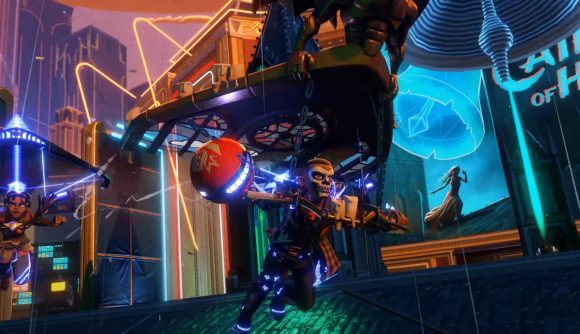 Grab your popcorn and get ready to hit your friends in the face with big red balls, because Knockout City is heading to the movies.

Revealed at EA Play, Knockout City Season 2 is called Fight at the Movies and it’ll have you practicing the five D’s of dodgeball with a bowl full of pick and mix in one hand when it drops on July 27. Plus, with a new soda-themed ball that’ll leave sticky marks on your opponent’s screens, and new playlists, it seems there’s plenty of new content to enjoy.

The map looks intriguing too. Called Holowood Drive-In, the map’s scenery changes in real-time, giving you dramatic backdrops to navigate. The trailer shows players having to adapt to pyramids, castles, scary churches, and even a child’s bright pink bedroom as they pop up to disrupt your shots and your game.

That’s not all either, as shown by the trailer below, Knockout City is getting plenty of movie-themed merch for Season 2 too. We’re talking TVs for heads, tuxedos, and futuristic robot get ups.

Coming to a holo-theater near you on July 27th: Fight at the Movies!
Action-packed brawlin' that'll have you on the edge of your seat as you experience the silver screen like never before! Brawl on a constantly changing map, with a new ball, new cosmetics, new Playlists and more! pic.twitter.com/l4B7XviNb2

Basically, you can turn up to the new season of League Play in style. That’s all you want right?