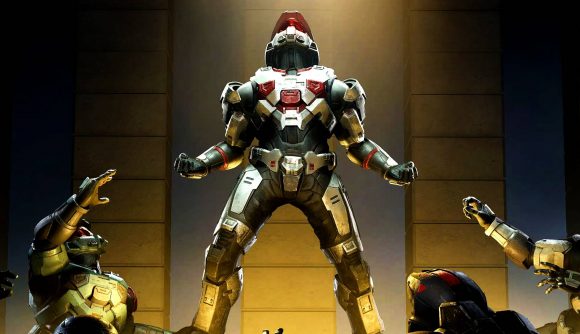 Halo Infinite may not have a co-op campaign and Forge mode just yet, but it does have a fully functioning Multiplayer that’s continually being looked at, tweaked, and updated by the developer 343 Industries. In the Halo Infinite update that drops today, players will be pleased to know that a number of removed skill jumps are being reintroduced to the shooter. We have everything you need to know about this reversal, and the rest of the Halo Infinite patch notes for the update today, right here.

Following the fact that the Halo Infinite Season 2 update controversially removed several skill jumps, a shaky start to said season left 343 Industries and the developers “reviewing options” when it came to the popular Xbox shooter. And, from what it looks like, this review has led to the restoration of several skill jumps on Aquarius, Bazaar, Live Fire, and Streets in Halo Infinite’s multiplayer modes.

Looking specifically at the Halo Infinite patch notes, we learn that “various skill jumps that relied on small props or thin ledges” are the sort of skill jumps we’re talking about – you should still be able to rocket-jump if you’re brave enough!

It goes without saying that this is ultimately a win for the Halo Infinite community, who at the time were quite vocal about their opposition to the removal of these features.

Halo Championship caster Alexander ‘Shyway’ Hope, who was critical of 343 Industries at the time, has praised the developer for taking community feedback to heart and restoring these changes.

To people wondering why I'm thankful, when this shouldn't have happened in the first place..

343's decision WAS out of touch w/ the community – BUT they listened & turned it around – that's a W.

Community feedback was valued, lil more optimistic for the future now – so thanks🙏 https://t.co/hFyoYzPObx

OpTic Gaming’s Halo pro Tommy ‘Lucid’ Wilson was another community member critical of 343 Industries at the time of the skill jumps’ removal. While he hasn’t taken to social media to share his thoughts on the restoration, we’re certain that he’ll be happy they’re back – just like the community as a whole.

Elsewhere in the Halo Infinite patch notes for May 25, jamming was removed from all semi-automatic weapons (like the BR) and Wasps on Hightower will now have a two-minute respawn cooldown. You can find the rest of those patch notes right here.

A #HaloInfinite patch is now live with changes to skill jumps, weapons jamming, and the "tank gun" glitch. If you're currently playing, close and relaunch to install the update (2 GB or less). More info in the "May 25 Patch" section of our release notes: https://t.co/8VJYb5hDHP pic.twitter.com/vmeqcJVSpY

Halo Infinite has had an unusual lifetime so far, which is dictated both by an impressive Multiplayer mode and the lack of features that many consider essential to the Halo experience – like Forge mode. The Halo Infinite update today is, of course, just the first step of many when it comes to 343 Industries bringing this game to its full potential, but it’s an important first step.

While we’re not privy to the conversations being had regarding the future of the latest Halo game, we’re certain that it would be fascinating to be a fly on the wall for those talks. For example, could you imagine being in the room when they discussed the idea of Halo Infinite having a hero shooter mode similar to Overwatch? That would be fascinating.