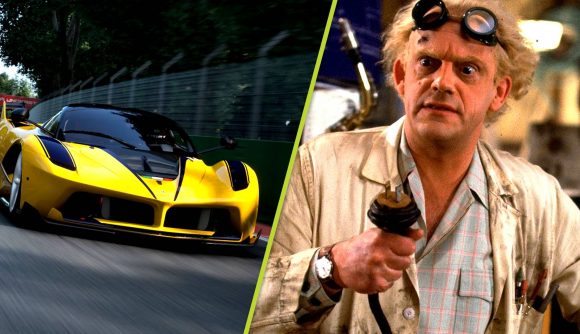 Polyphony Digital’s iconic racing game series is back on PlayStation with Gran Turismo 7. With the Gran Turismo 7 car list spanning over 400 cars and over 60 circuits to race them around on, there’s a lot on offer and something for everyone – even ‘80s movie buffs. Gran Turismo 7 fans think they’ve spotted a nod to Back To The Future’s Emmett Brown in the American Sunday Cup.

In the American Sunday Cup, one of Gran Turismo 7’s easier events, players will find themselves on the starting grid with a Delorean DMC-12 2004 – a later model of the iconic car featured famously in Robert Zemeckis’ Back To The Future. If you check the race leaderboard at any point during the event, you’ll find that the driver of said Delorean is actually called E. Brown.

Reddit user ‘MyMoonMyMan’ has shared an image of the leaderboard, connecting the dots that this is almost definitely a reference to the iconic Doc Brown – played by Christopher Lloyd in the film series. Either that, or it’s one hell of a coincidence.

We know Doc said we were “gonna see some serious shit” when he hit 88 miles per hour in his Delorean, but we didn’t think we’d see him hitting apexes out on the track.

[Easter Egg] The driver of the DMC DeLorean in the American Sunday Cup is called E. Brown – reference to Doc Emmett Brown, the scientist in Back to the Future from granturismo

You’ll still need roads where you’re going, but this fun easter egg is just the first one players are spotting in-game. With iconic cars like the Aston Martin DB5 1964, famously driven by James Bond, and the Chevrolet Camaro 1969, famously used by a certain yellow Transformer, who knows how many other references Polyphony have snuck into this game.