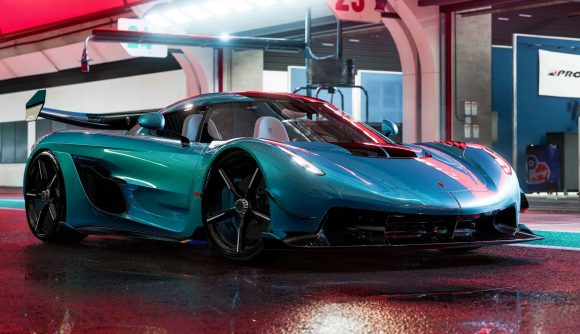 Forza Motorsport was first unveiled at the Summer Game Fest Xbox Showcase and is the eighth entry in Xbox’s exclusive sim racer. It’s traditionally been one of the best-looking racing series on any platform, and it won’t be any different this time as its developer, Turn 10, has announced the resolution and framerate players can expect come spring 2023.

According to an announcement in a blog post, Forza Motorsport will run at 4K/60 FPS on the Xbox Series X and 1080p/60 FPS on the Xbox Series S. It hasn’t been made clear yet whether there will be an option to swap between video modes and framerates, though the Motorsport guise of Forza is usually locked at 60 FPS minimum for slick track action, whereas the Horizon spinoff gets more graphical customisation.

The post also states that there will be real-time ray tracing on the track in Forza Motorsport on both Microsoft consoles, which is a mean feat to pull off at 4K/60 FPS and certainly rivals team blue’s Gran Turismo when it comes to graphical fidelity.

So, Xbox Series S owners might be disappointed with the 1080p resolution, it seems that they will be getting ray tracing to make up for it. You can’t say that the Series S doesn’t punch well above its weight (price), that’s for sure.

Forza Motorsport is set to release on Xbox Series X|S and PC in spring 2023. Check out the Forza Motorsport gameplay trailer to see the game in all of its tyre-squealing glory.