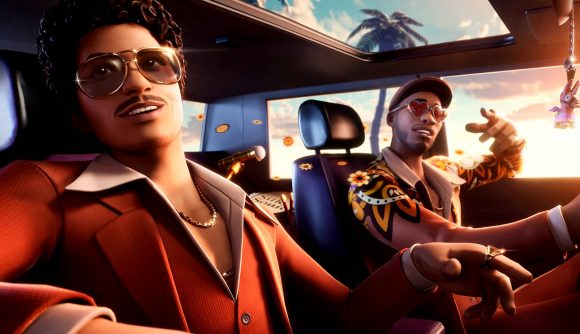 Epic Games is getting ready to Blast Off with another entry into its incredible Icon Series – a collection of cosmetics based exclusively on celebrities and streamers. Silk Sonic’s Bruno Mars and Anderson .Paak will be the next real-life icons to find themselves fighting for a victory royale in Epic Games’ battle royale.

Fortnite’s Silk Sonic set is going to be packed with cosmetics for fans of the R&B duo to check out. Both the Bruno Mars outfit and the Anderson .Paak outfit come with three alternate styles to choose from: an open-collared burgundy suit, a fur coat, and a psychedelic reactive style.

That’s not all, though. The Silk Sonic set comes with a Sound Scepter Pickaxe that doubles as Back Bling for Bruno Mars and the Sonic Snare Back Bling and Boom Bap Pickaxe for Anderson .Paak. Players can also Skate around with the Freedom Wheels Emote, featuring music from the iconic duo themselves.

To celebrate the addition of Bruno Mars and Anderson .Paak – and to offer players a chance to unlock both outfits ahead of their release – Fortnite is hosting the Silk Sonic Cup on February 7. Earning at least eight points in this event will bag you the Silk Sonic spray, so it’s worth checking out if you have some spare time. 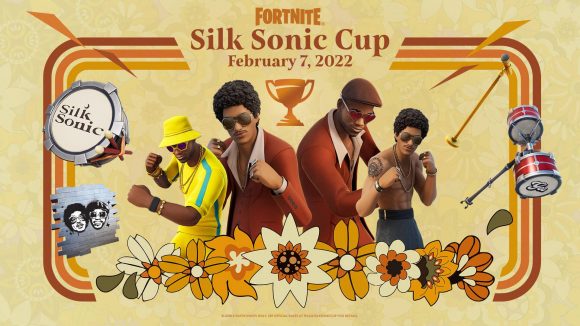 Silk Sonic’s arrival on the Island also marks the arrival of a new radio station: Icon Radio. With music featuring Silk Sonic and Bootsy Collins as host, we can’t think of anything better to make us Put On A Smile as we cruise towards a Victory Royale.