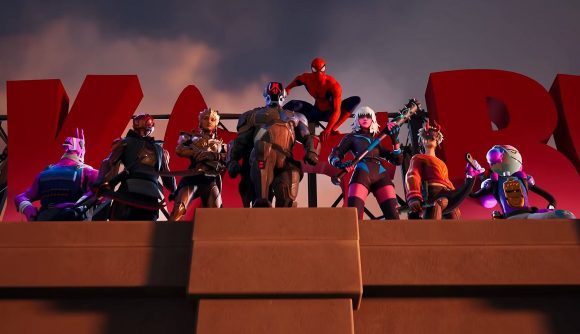 Epic Games is always making amendments to Fortnite’s ever-increasing arsenal and the recently-released v19.10 update is no exception. The Ranger Assault Rifle has been a second-rate choice since its inception alongside the MK-Seven Assault Rifle at the start of Chapter 3. It has always hit harder than the MK-Seven, but accuracy was always a problem. Well, until now.

Fortnite’s latest title update is finally here and there’s a lot to unpack. Tilted Towers, the infamous POI from Fortnite’s Chapter 1 map, is back once again and there’s a new League of Legends Arcane collaboration on the way. It’s all exciting stuff, but it’s all a little superficial. There’s more to learn about v19.10 and the changes Epic Games has made to Fortnite behind the scenes – the meta is changing and it looks like there’s a new King of Fortnite Island: The Ranger Assault Rifle.

Epic Games doesn’t do patch notes in the traditional sense, but that doesn’t mean changes aren’t being made. ‘HYPEX‘, a notorious Fortnite data miner, has confirmed several key changes to the Ranger Assault Rifle’s performance that easily cement it as one of the best Fortnite weapons.

The Ranger Assault Rifle’s damage to players, and damage to builds, is being increased by one point. This sounds like only a minor amount, but with the MK-Seven’s build damage being nerfed yet again, it only widens the gap between the two weapons.

This change alone might not convince you that a new meta is on the horizon, as the MK-Seven still has its unique first-person iron sights ADS feature. However, this isn’t the only buff the Ranger Assault Rifle is receiving. HYPEX also reports that the Ranger’s accuracy while firing is being drastically improved.

Due to the heavier nature of the weapon, the Ranger Assault Rifle is still going to fall short when compared to the MK-Seven based solely on accuracy. However, these buffs will undeniably shake up the meta for Fortnite Chapter 3 Season 1. The Ranger Assault Rifle hits harder than ever and – with its bullet spread being reduced – there’s no better time to pick one up and gun your way to a Victory Royale.