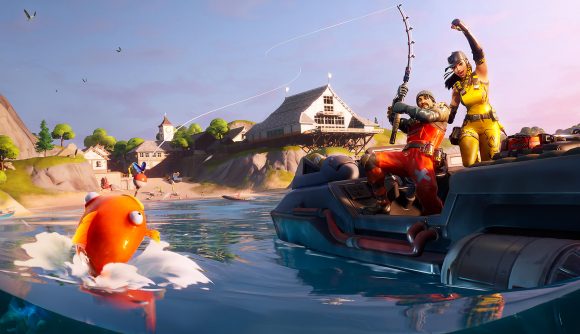 It would seem that you can now go fishing in Fortnite without water. That’s according to a stream featuring Nicholas “Nick Eh 30” Amyoony and James ‘FaZe Replays’ Crowder, which shows the duo managing to fish items out of the ground using the newly-added fishing rod.

The animation even has a water splash sound, so we’re going to assume that this is a bug in Epic’s battle royale title as opposed to a feature.

This wasn’t discovered by NickEh30, who credits YouTuber Orange Guy who featured the exploit in a video that was uploaded two days ago. In order to fish items out of the ground, you need to make a one-by-one structure, go to edit the floor and then use the fishing rod while looking directly down.

Players can obtain healing items, materials and ammo using this method, although Nick Eh 30 wasn’t sure if this would be regarded as cheating or not.

“Is that considered cheating?” Crowder says. “I dont know, dude, I think so” Nick Eh 30 replies, before continuing to fish.

This bug follows Epic making some changes to how the fishing rod worked in Fortnite Chapter Two, including adding the ability to hook loot from the floor following a death. However, the Fortnite community has been left without patch notes for some time now, and this new glitch has prompted some players to call for Epic to start writing them again.