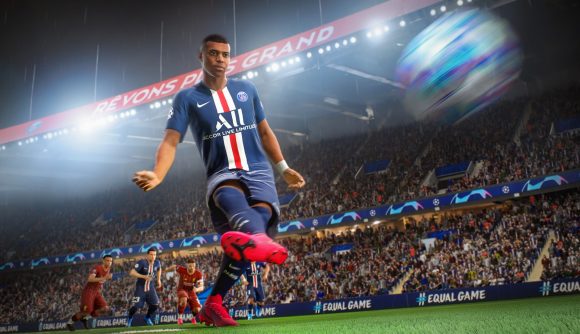 EA Sports has just revealed some new information about gameplay in FIFA 21, promising that players will “get rewarded for your creativity and control with new gameplay features.”

The additions are aimed at giving you more control of your team on and off the ball, as well as fixing some of the issues that have dogged FIFA for the past few years. There’s nothing to dissuade the usual complaints that FIFA is just the same every year, but then… it’s a game of football. How different can we really expect it to be? Whether these changes prove to be minor tweaks to the same basic formula or genuinely upend the meta of the game remains to be seen, but the truth is probably somewhere in between.

Most of these additions are likely to be folded into your playstyle without you noticing too much, while others might be sideshow distractions ignored at a competitive level. However, there are a couple which might actively evolve the game, if only slightly.

This isn’t a definitive feature per se, but is a philosophy EA claims to have honed even further in FIFA 21, and is a big part of many of the more tangible elements EA is adding to this year’s installment. An example offered is “in the past, a through pass used the Short or Long Passing attribute to determine quality. However, in FIFA 21, a through pass is a mix of Short/Long Passing, Vision and Composure attributes.”

The basic idea here is that your Kevin De Bruyne isn’t just an avatar with similar stats to the real life De Bruyne, but that he moves, thinks and reacts like De Bruyne would. Several of the other features offer a bit of depth on how Player Personality will actually influence in game performance.

Much like Allan Saint-Maximin with the ball at his feet, FIFA have been nudging the dribbling controls this way and that for the past few years. FIFA 21 is no exception.

Inspired by real life dribblers – the FIFA 21 trailer uses real life footage of Bernado Silva rinsing Eric Lamela and Danny Rose – Agile Dribbling is designed to let you move the ball with rapid and precise touches, working your way through tight gaps to find space. Activated through pressing RB/R1 and pressing the Left Stick, it lets you knock the ball around sharply to combat jockeying.

Player Personality comes back into play here, as Dribbling, Agility, Reactions, and Ball Control all determine a player’s effectiveness here. Son, Mane, and Sterling were amongst those highlighted in the trailer. This will sit alongside the LB/L1 Strafe Dribbling system, rather than replacing it.

EA seems to believe every feature every year is a game changing one for FIFA, but if this one works as intended, it could be the biggest development in years.

How many times have you found yourself running at the defense, only for Mo Salah to hug the byline instead of cutting inside where the space is gaping? With Creative Runs, these frustrations should hopefully be a thing of the past.

You can now control off the ball runners simultaneously with dribbling, with a few different options at your disposal.

Decide where your teammate makes their run after a pass by immediately flicking the Right Stick in the desired direction. This feature works with any type of pass; Ground Pass, Lob Pass, Through Ball, and even Crosses (Ground Pass example: X/A then flick Right Stick). The poor AI running meant one-twos never really worked in FIFA, but this idea has more promise.

If you’re co-ordinated enough, you can have up to 5 directed runs going at the same time.

If you want complete off the ball control, you can have that too. Pressing both Sticks at the same time locks you to your current player when attacking, letting the CPU AI control the on-ball player. This frees you up to make truly creative runs with more control than ever.

Timing of these moves will need to be precise, otherwise you’ll start activating skill moves and the likes instead, but done right, this is an update with real potential.

Defensive midfielders like N’Golo Kante, Fernandinho and Casemiro are a crucial part of modern football, but they’ve largely been a passenger in recent FIFA instalments. Hopefully, this injection of personality to the game will shake that up a bit.

Players who are more tactically aware in real life will read the game better in FIFA 21, and will naturally adopt more advantageous positions, both in attack and defence.

All of the above features are available in some form to all players in the game, but the ones below are specifically for players with a high Positioning attribute only.

The Defensive Awareness attribute can impact many elements of Defending Personality, and the specific behaviours below scale according to to the player’s attribute.

Essentially, players will run into each other less in FIFA 21. By being more aware of the other players on the pitch and jumping or dodging a collision more often, we’ll see less car crashes this time around. Even when players inevitably do run into each other, they’ll be aware of it, and rather than an inescapable tangle of legs, we’ll see them changing their body shape for smaller impacts. These should lead to more realistic scrambles.