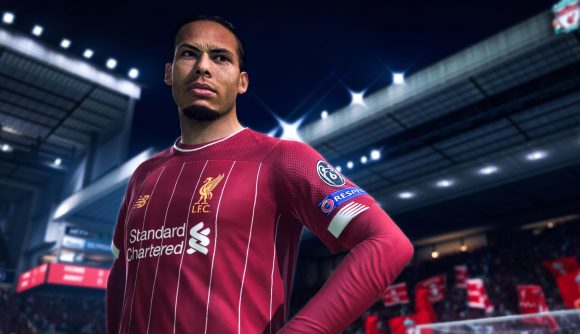 EA Sports has unveiled the Team of the Year (TOTY) for FIFA 20 Ultimate Team with 11 new blue cards coming to the game. For the first time ever, the TOTY was voted for entirely by fans as FIFA players made their picks over the last month.

After their Champions League triumph against Tottenham Hotspur, Liverpool was the popular choice with five of the Premier League club’s players receiving new cards. However, there surprisingly wasn’t a place for Liverpool’s joint top-scorer from last season Mohamed Salah with tough competition for the three attacking positions.

Instead, leading the line for TOTY is his Liverpool teammate Sadio Mane (LW), Paris Saint-Germain dynamo Kylian Mbappe (ST), and six-time Ballon d’Or winner and Barcelona superstar Lionel Messi (RW). The three attacking players are currently the only TOTY cards available in packs,  with rest being released at a later date.

Mane is technically the weakest of the three attackers but his new blue card still boasts some incredible stats. With his 99 pace, 97 dribbling, 95 shooting, and 99 positioning and finishing in-game, the Senegal international is well worth the three million coins he’s currently selling for on the FUT market.

Meanwhile, 98-rated Mbappe is fetching more than double that fee. The Frenchman is worth it though, as his 99 pace, 96 shooting, 98 dribbling, 90 physicality, and five-star skill moves make him a near-perfect striker.

Lionel Messi has the highest-possible rating in the game with a 99 rating, but despite that he’s selling for slightly less on the FUT market. At the time of writing, Messi’s TOTY card is selling for 5.77 million. The Argentine’s card is outrageous with 96 pace, 98 shooting, 99 passing, and 99 dribbling. The Barcelona star has outstanding in-game stats too with impeccable 99 ratings in acceleration, positioning, finishing, long shots, vision, free-kick accuracy, short passing, long passing, curve, ball control, dribbling, and composure.

Another two Premier League players Chelsea’s N’Golo Kante and Manchester City’s Kevin De Bruyne also make the cut in midfield and will be joined by a second Barcelona player in Frenkie de Jong. The full FIFA 20 TOTY can be found below: