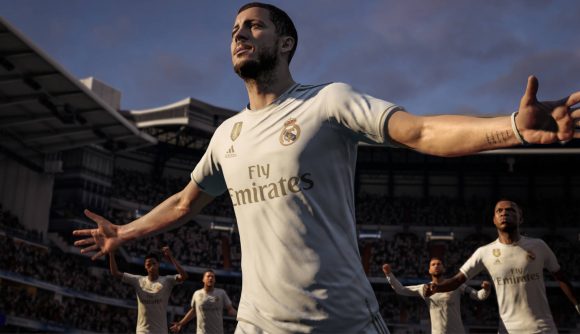 EA Sports has apparently taken the role Ebenezer Scrooge this Christmas as the games publisher has been hit with backlash over the value of this year’s FUTmas event on FIFA 20 Ultimate Team.

FUTmas has been an annual event since FIFA 13 and counts down the days to Christmas with an advent calendar of Ultimate Team goodies. Every year, new upgraded cards are released for FIFA players, usually as Squad Building Challenges (SBCs), to put into their squads but many feel FIFA 20’s ‘gifts’ are far too expensive.

In particular, FIFA streamer Nicholas ‘Nick28T’ Kahwaji has been very vocal about his disgust surrounding the event: “EA Sports’s greed has not only ruined FUTMAS but also ruined FUT,” he says. “Disgraceful promotion that was always meant to give back to their community after a full year of earning billions.”

Nick28T used the recent FUTmas SBC for Real Betis’ Nabil Fekir as an example, an 87-rated card with fantastic stats including 88 shot power, 93 dribbling and four-star skills. It’s a great card but the SBC costs almost 200,000 coins which is outrageous considering Antoine Griezmann’s 89-rated base card has similar stats for just 90k. Even worse, the Betis midfielder also has an 86-rated in form which has similar stats but only costs around 25k and unlike his FUTmas card, it can be traded on the market.

Many others have expressed their distaste for the event, including Craig ‘Nepenthez’ Douglas, who isn’t sure if Arsenal’s 3-0 defeat to Manchester City was was more painful than FIFA 20 FUTmas. At least he has fellow streamer Edwin ‘Castro’ Castro in his corner to comfort of him with warm words.

The event still has a long way to go as new SBCs will be released every day between now and December 24 though the event is five days shorter than last year’s event. FIFA 20 will see 24 FUTmas SBCs as well as another six bonus players who will be available via objectives. With 30 FUTmas cards in total, you hope at least one of them will be good value.