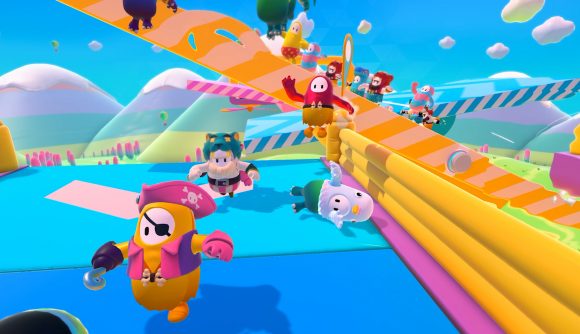 Fall Guys is the strangest battle royale around, and people already adore it. Mediatonic’s new creation forces 60 players to compete in strange outfits, completing courses or tasks until there is only one player left.

The game recently had a beta that a lot of people played, loved, and watched on Twitch – in fact over 100k people were watching at one time. Codes were sought after, and everyone wanted a little piece of the action.

So after this wildly successful test, the beta closed and everyone went back to watching League of Legends, Fortnite, and Warzone – that is until today when suddenly Fall Guys appeared in the top 12 games being watched on Twitch. Why? Because a secret test wasn’t exactly a secret after all.

Earlier today, the Fall Guys crew did an internal test, but it wasn’t exactly internal. People began streaming their adventures and playing the game once more, in what is arguably one of the best PR stunts of all time.

LOL WE DID NO MARKETING

IT WAS A SECRET

That has been confirmed by the Fall Guys social media team, who earlier today tweeted out a Slack screenshot in which one employee says, “I can’t imagine many people will realise it’s playable because we finish the test.” However, it turns out that screenshot was doctored and it was all planned. Crafty.

Look how well this conversation aged…

If you want to play Fall Guys yourself, you’ll be happy to hear that the game is free in August for PlayStation Plus users. It’s worth noting that another massive game in the streaming scene, Rocket League, did the same when it came out several years ago, and is still hugely successful.

If you’re a PC player, you can find the game on Steam.