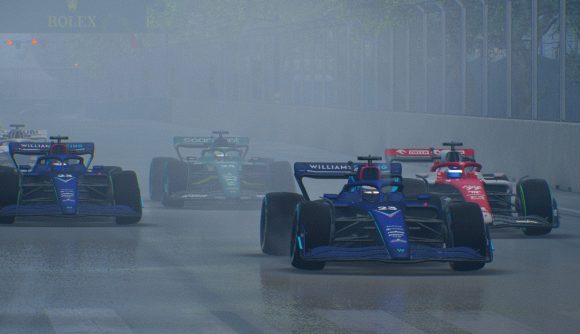 It might not feel like it looking at this year’s current Driver Championship standings, but Formula One can be a very unpredictable sport – and the F1 Manager 2022 development team has put in a lot of work to make sure this feeling of unpredictability is preserved throughout the experience. Ahead of the highly anticipated F1 Manager 2022 release date, we had the opportunity to talk with game director Andy Fletcher about the “wide range of different incidents” players will face while playing and how Frontier Developments has made sure that things aren’t always going to go to plan.

“ What we’ve been doing is, something we’ve not done before actually, running a huge series of automated tests – so we can check our balancing of these incidents across multiple seasons [and] hundreds of thousands of races,” Fletcher explains. F1 Manager 2022 is the first sports game developed by Frontier Developments, who’s recent slate of games includes Jurassic World Evolution 2, Planet Zoo, and Elite Dangerous.

However, players looking forward to F1 Manager 2022  will be pleased to know that they won’t have to deal with some of the more unusual incidents we’ve seen from the sport and throughout the 2022 Formula One season, such as clipping a groundhog in the Canadian Grand Prix or getting a plastic bag caught in your wheel at Baku (thankfully only one of those was Latifi). They will, though, have to deal with pit stop errors, collisions, and lock-ups – among other things.

But, if you’re worried that you’re just a sitting duck when it’s lights out, you’ll be pleased to know that you shouldn’t be concerned about getting caught out. Fletcher commented that “there’s an element of control you have over [incidents]”, with players able to dictate their driver’s race pace to avoid accidents and certain drivers being “more controlled” and able to avoid driver-led mistakes.

However, that being said, he made it clear why it was important to have a bit of randomness in each race.

“ I think there’s a school of game design that thinks ‘unless everything is in the player’s control, it shouldn’t be there, right?’ But, actually, that wouldn’t be true to the sport – because you do have these things that occur. Sometimes it’s not your fault, sometimes someone can take you out, and that’s your race over. [So,] we have to keep some of that unpredictability because… the consequences of the Safety Car, Virtual Safety Car, red flags… That’s a huge part of the strategy of the sport.”

We already knew that F1 Manager 2022 will use real race day audio from Formula One teams, but it’s clear that authenticity is at the forefront of everything Frontier Developments is doing with this game – and we can’t wait to head to the pit wall for the first big race of the season. Keep your eyes on The Loadout over the next couple of days, though, for more from Andy Fletcher and a full run-through of our interview with the F1 Manager 2022 game director.