When is the Exomecha release date? Exomecha is an upcoming free-to-play online competitive shooter from TwistedRed that takes place on a fictional planet called Omecha. You’ll take to the battlefield in your own personalised mech where you’ll be expected to fight over the planet’s resources and destroy the enemy team.

The game looks a little bit like Battlefield 4, Titanfall, and Crysis all rolled into one linear Transformers plot and it sure looks exciting. With large scale battles, big and small mechs, and even a dragon to contend with, there’s certainly a lot for players to watch out for in Omecha.

On top of that, you’ll be able to personalise your mech with different pieces of equipment and abilities, allowing you to really tailor your fighter to your play style. What we’re really saying is that we’re pumped for the game and since TwistedRed has already given us information about the Exomecha release date, here’s everything we know about this upcoming tactical shooter.

The Exomecha release date is set for Q3/Q4 2021. The game was revealed in the Xbox Games Showcase but TwistedRed later clarified fans shouldn’t expect to be able to play the game properly until late next year.

You can watch Exomecha’s first trailer from the Xbox Games Showcase above. It shows off what looks like Battlefield 4 and Titanfall-style gunplay set in a futuristic landscape with vehicles, long-range rifles, and melee weapons all in play.

It also gives a glimpse of some pretty hefty mechs going head to head on a battlefield, as well as a robotic dragon which lays waste to everything in its path.

Players are thrown into a planet called Omecha in Exomecha where they have to fight to take control of the planet’s valuable resources across three different game modes. While the world you experience will be pretty natural at first, the planet will evolve over time, creating unpredictable environments to fight over.

You’ll be able to control your own personalised mech, which will be equipped with both long-range guns and giant melee weapons. While it’s tempting to play the long game and opt for the game’s guns, it’s worth noting that the melee weapons cause the highest damage in the game – so you’re going to need to go toe to toe for some fights.

Related: Here’s what we know about the Halo Infinite release date

And finally, if you’ve watched the trailer, you’ll know there’s a dragon in the game. Well that dragon is AI-controlled and it’ll wreak havoc for both teams – but there’s a reward if you can take it down.

Exomecha will ship with three games modes, but that’s pretty much all we know so far. One will focus on large-scale team battles, one will be a specialised battle royale mode, and the last one will be a small objective-based game mode. 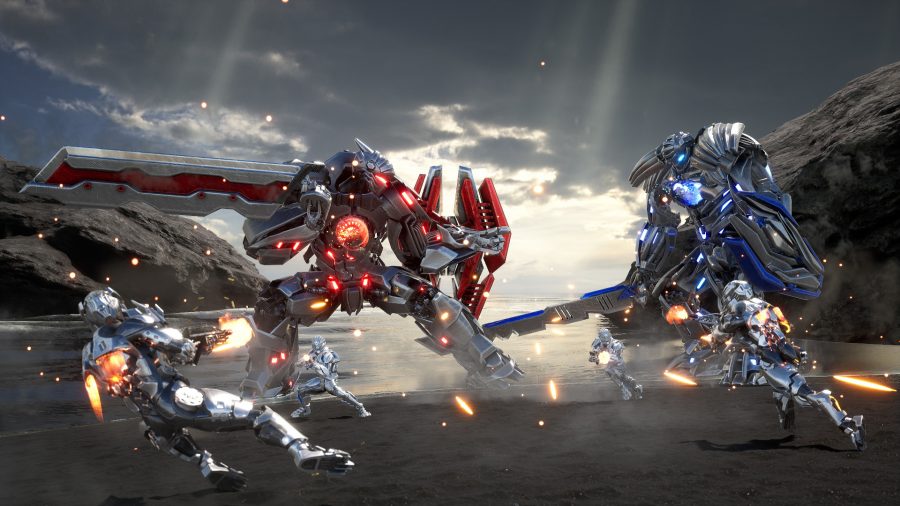 Wondering what platforms Exomecha will ship on? Well, you’re in luck. Exomecha will be coming to Xbox Series X, Xbox One, and PC. Cross-play will be enabled so you can play with your friends no matter what platform you’re all playing on.

TwistedRed hasn’t set a date for the Exomecha beta just yet, but if you can’t wait to get stuck in, you can sign up for the beta right here. Just make sure you check your emails every now and then.

There you have it. That’s everything we know so far about Exomecha. Omecha sounds like an exotic new world to explore, so we can’t wait for TwistedRed to lift the lid on the game’s development in the future.

The best Magic: The Gathering gifts

How to stream on Twitch