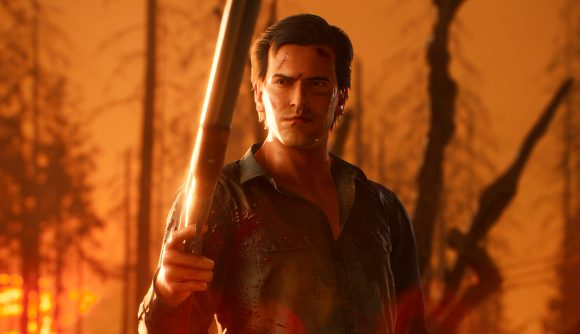 Fans of the cult classic horror-comedy franchise, The Evil Dead, are getting to enjoy Ash on the smaller screen as the chainsaw-wielding hero has catapulted it to great success in Evil Dead: The Game. With characters from the films and TV series popping up all over, it really is fan service done right, but there are notably some fan favourite characters missing from the game. However, Bruce Campbell, who plays Ash in Evil Dead, might have just let slip one character who could be making a triumphant return – groovy.

In an interview with Looper, Campbell was asked: “Who else were you excited to return to voice their characters? Did Ted Raimi voice Henrietta? Do we get him as Chet from Ash vs Evil Dead?” To this, Campbell responds with a short sentence saying: “Yeah, we get Ted as Chet. That was as important as anyone else”.

Without realising it, Campbell pretty much confirms that we will be getting the character of Chet added to the game at some point, most likely as DLC.

Chet is not the only Evil Dead character currently absent from the game that could make an appearance. TheGamer recently reported that a fan has datamined Evil Dead: The Game and discovered files that allude to the character of Ruby Knowby, who is played by Lucy Lawless in the TV series, being a part of the game. The fan found voice lines in the game files that reference Ruby and her Demon Spawn.

Taking all of this with a pinch of salt until an announcement is made, we can speculate that an Ash Vs the Evil Dead DLC character pack could be in the works right now. Both Chet and Ruby star in the series and fans would be excited to see them both make an appearance in Evil Dead: The Game. So it makes sense for this to be Saber Interactive’s next step.

This could also be seen as a little Xena Warrior Princess reunion if both Lawless and Raimi make an appearance alongside Campbell. The three of them starred in the series together, with Lawless playing Xena, Raimi playing Joxer, and Campbell playing Autolycus. Maybe we could even see some Xena DLC down the line for Evil Dead: The Game. It isn’t the craziest idea considering that both Xena and The Evil Dead have crossed over on multiple occasions in the comic series Army of Darkness/Xena Warrior Princess.

Only time will tell what Evil Dead: The Game has in store for us all, but it is looking hopeful that we will be seeing some more iconic characters from the Evil Dead universe making an appearance.