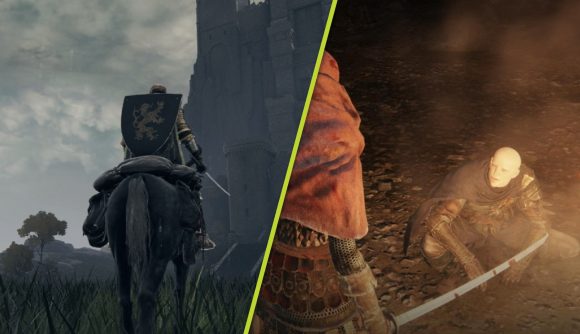 If constantly dying in a FromSoftware game is your kink, that means you’re probably playing Elden Ring. And if you’re playing Elden Ring, you’ll want to know that the latest patch just dropped, bringing with it some meaty changes that will affect your journey to becoming the Elden Lord of the Lands Between – including the addition of new Patches quest events.

There are two major overarching changes to Elden Ring in patch 1.04, with the first being that “new event phases” have been added to the NPC Patches. Players have already discovered the nitty gritty details of what exactly has been added, it involves finally being rewarded with an emote for Patches’ questline.

“If you revisit Murkwater Cave there will be a fog gate again,” says Reddit user Silvite Ramirez. “Open the chest (again), Patches will jump down and start fighting you. He’ll recognize you and surrender, and you’ll (finally!) get the Patches Crouch emote.”

The other significant change in the patch is the ability to toggle the auto-rotating camera on or off, meaning if your character changes movement direction, so does your camera – great for not getting absolutely slapped by creatures hiding on dungeon walls.

Numerous balance adjustments have also been made to Elden Ring, including increasing the attack speed and recovery of Colossal Swords and weapons, as well as also increasing their two-handed damage. Their physical block rate and guard boost have also been buffed. Among a host of other revisions, low level FP and stamina growth has also been increased, which will make your early game less difficult.

The new patch brings a host of extensive changes to sorceries, incantations, and weapon skills, too, and includes both nerfs and buffs. Crystal Barrage, Gavel of Haima, and Shatter Earth have all had their casting speed increased and recovery time decreased, to give just some examples. Weapon skills have all had similar adjustments to cast speed or stamina cost.

Player’s will be glad to know that there have been a horde of bug fixes in the latest update. This includes fixing the co-op bug that caused problems during the Rennala Queen Of The Full Moon fight, adding a protective barrier to Millicent so she can’t be unintentionally harmed after a certain point, and fixing the bug that stopped players from receiving rewards from beating the Dung Eater, among many other quality of life changes.

There’s no denying this is one of the most significant patches to grace Elden Ring, so now might be the perfect time to jump back in if you’ve been waiting for a chunky update that sorts out some of these issues.