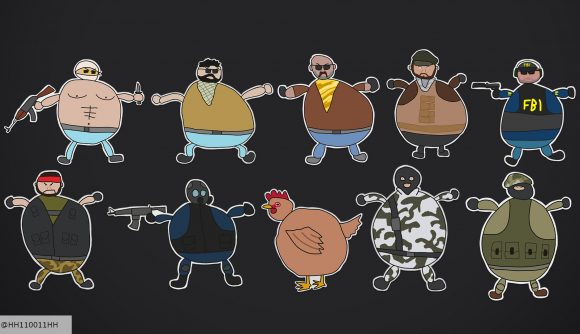 First spotted on Reddit in a post by the creator Hoxton_Workshop, the distinctive artwork, created by HH110011HH, has been proudly displayed at the top of CS:GO’s Twitter page for quite some time now. While the artist describes them as “poorly drawn”, fans clearly think they’re charming. Characters included in the collection are the Terrorist, FBI, Ido, IDF, Guerilla, Arctic Avenger, Elite, SAS, Leet Crew, and a man-sized chicken.

There were initial concerns from the responses on Reddit that the original artist wasn’t involved in the project, but both Hoxton_Workshop and HH110011HH have confirmed their collaboration on the project. The rest of the responses have been of universal praise, with a number of commenters impressed with the holographic sticker shown off in the post. On their Steam Workshop page, there’s a full suite of “poorly drawn” CS:GO characters in capsule form, said to be available in both foil and holographic variants.

If you, like the vast majority of the commenters, really want to see these characters appear in some official form on CS:GO, the Workshop page has a voting system in place for approval to be added.

I have collaborated with the very talented sticker and skin maker @Hoxton_workshop to create a set of stickers with a much higher quality, Go check them outhttps://t.co/2GdYwcfIzs

However, if you can’t wait for Valve to officially support them in-game, Hoxton_Workshop has also made the stickers available in a single image, so that you can print them for yourself.