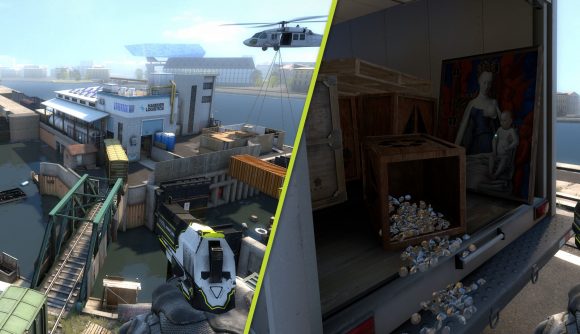 The PGL Antwerp Major is well underway, with some of the best Counter-Strike: Global Offensive players in the world looking to write their names into the history books. This is the first time a Major competition has been hosted in Belgium, so to commemorate the moment, Antwerp Harbour has been recreated in all its glory in CS:GO.

The map, which was developed by Mapshot on behalf of the city of Antwerp, has become one of the most popular fan-made maps on the Steam Workshop in the last couple of days. Released on May 6, the Deathmatch and Arms Race map has since been downloaded thousands of times.

It’s hardly surprising either, given that the map nods to pretty much everything Antwerp is famous for. From Velo bicycles to diamonds to Ruben artwork, there’s something for everyone in this Workshop map. There’s also plenty of adverts for VisitAntwerp – just in case, you know, you get the itch to visit the city after warming up your aim in the docks.

Since launching, the map makers have already pushed one update which improved the textures of the water – something which was well-requested by the community. Whether we’ll see future updates though, remains to be seen.

Either way, it’s a brilliant way of showcasing parts of Antwerp to the wider gaming community – particularly those who aren’t able to make it to the final, which will be held at the Sportpaleis from May 19-22.

If you’re one of those unlucky souls – but you still want to get into the spirit of things – you can download the map here.