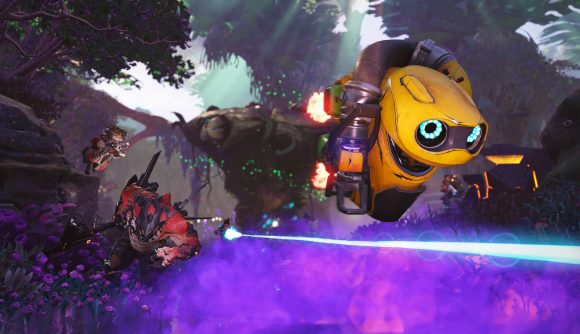 It’s no secret that Crucible, Amazon Games’ new free-to-play shooter, has taken many forms over its four-year long development. While Relentless Studios is responsible for a lot of changes, so too are content creators who have shared their thoughts on development over the last few years.

According to the development team, who reached out to and worked with as many gaming communities as possible, feedback from private testing events have led to them reworking entire systems including the game’s monetisation plan.

“We brought a wide variety of people in to give us feedback on Crucible throughout its development,” franchise lead Colin Johanson tells The Loadout. “The list is long and too many people contributed to call out individuals, but we worked with pro gamers, streamers, content creators, cosplayers, figurine designers, tournament organisers, dancers, cultural consultants, and many more. We did our best to get feedback from as many gaming communities as we could.

“We made some massive shifts in development based off of these conversations. We tossed out the entirety of our original monetisation plans, re-designed the visual direction of nearly all the hunters in the game, and removed entire systems.”

The game has a store similar to that of Apex Legends. Players can purchase the battle pass and cosmetics using real money, although credits can be earned from playing the game. Relentless hasn’t said what the previous monetisation plan was, but players clearly had a strong view on it if it was changed.

Amazon Games and Relentless Studios admit they owe a lot to the community. To say thank you, all the names of those that helped them have been added to Crucible’s credits. You’ll be able to find these on the game’s website once servers are up and running.

Crucible launches on May 20. You can read about our hands on experience of the game here.