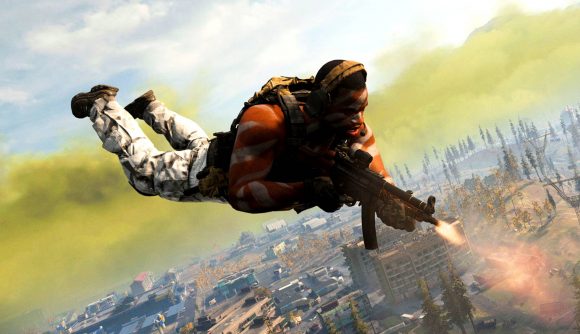 If there’s one missing gameplay feature that Call of Duty Warzone fans have been consistently asking for from Raven Software, it’s some sort of ranked mode for the popular free-to-play battle royale game. With other popular battle royale games like Fortnite and Apex Legends both offering competent ranked modes, why can’t Call of Duty – a series known for offering competitive multiplayer – do the same for Warzone? Well, it sounds like they’re working on it. Recent leaks suggest that Warzone will be getting some sort of Ranked mode before the Call of Duty Modern Warfare 2 release date.

According to the popular Call of Duty data miner and leaker ‘TheGhostOfHope‘, a ranked mode for the current iteration of Warzone is coming at some point before Modern Warfare 2 releases – most likely during the final season of Call of Duty Vanguard’s lifetime.

The leaker hasn’t left it there – they also share an interesting detail about what to expect, something which is bound to dampen the excitement of a few fans.

In their tweet, which you can see below, they say that this “will not be a full fledged ranked mode… but will be the blueprint [Activision] use going into Warzone 2.” This is going to mean that the ranked system we see in Warzone, if one is indeed coming, isn’t going to be quite as impressive and well-established as what we’re seeing with other free-to-play battle royale games.

Ranked mode for current Warzone is coming before MWII releases. Will not be a full fledged ranked mode but will be THE blueprint they use going into Warzone 2. Will be released on Current Warzone for testing purposes. Caldera only. Doesn’t look like it’ll be released for FK/RI. pic.twitter.com/C3SrsVpuqN

However, that’s not all. This prototype ranked mode is going to be available on Caldera, and Caldera only. This will annoy some fans who prefer Warzone’s smaller maps – Fortune’s Keep and Rebirth Island – but, it makes sense given the fact that Caldera is the only map that actually offers a standard battle royale playlist.

Games on Fortune’s Keep and Rebirth Island are similar enough, but they’re not exactly the same as the standard battle royale experience that we’re expecting to be on the recieving end of the ranked mode.

Of course, take all of this with a pinch of salt for the time being, but this is a reliable source and does match up with what we’ve seen elsewhere. Earlier in the year, it was reported that a Warzone ranked mode was not in Raven Software’s “immediate plans”, but clearly that didn’t mean they weren’t touching on the topic at all. It’s just something players are going to have to wait for – most likely until the Warzone 2 release date.