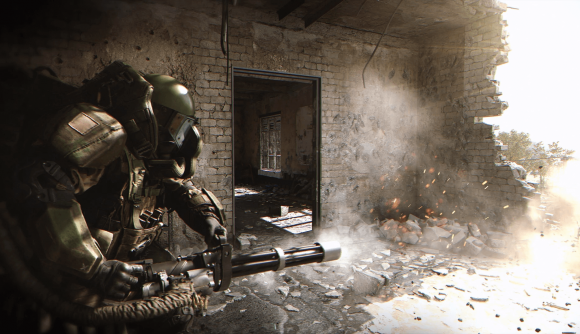 Oh no, it’s happened. The most overpowered killstreak in Call of Duty: Modern Warfare has been added to the game’s popular battle royale mode. That’s right – Juggernaut trios are coming to Call of Duty: Warzone this weekend.

The limited-time mode, which is available now has the same rules as a standard Trios match, except this time you’ll have the added lure and danger of fighting over the Juggernaut’s armour and devastating mini gun.

Only one special package will spawn at a time – and it’s visible to everyone. Once it’s been redeemed and the player is all suited up, you better run for the hills. If the juggernaut is killed and sent to the Gulag, the armour will disappear, and a new package will spawn elsewhere. This means you won’t be able to pick up the killstreak from a dead player, so here’s a word of advice – don’t try and camp them out.

So if fighting over a fancy bit of kit sounds right up your street, you know what to do. Just maybe don’t get in a chopper during the game.

Fight over Juggernaut armor drops in Verdansk and be the last team standing in Juggernaut Royale Trios, live now in #Warzone until Tuesday, July 7th! pic.twitter.com/MFq1nNa9bG