Call of Duty: Vanguard, as with every Call of Duty game, has a problem with submachine guns, which are ubiquitous and almost overpowering. So, if MP40 players are ruining your day, the Einhorn Revolving is a monster for close-range encounters, and the best way to play it is to focus on those one-hit kills, wiping enemy players out before they can kill you.

The Einhorn is another slice of World War Two rarity, based on the Becker revolving shotgun – only 100 of these were ever made. If you’ve played Vanguard’s campaign, you’ll see plenty more than that as most of the enemies are toting them. This’ll show how brutally efficient they can be.

But we can rebuild it, better than before. Our best Vanguard Einhorn Revolving class is going to beef up its ability to drop players with a single round so you can aim for a different target every time you squeeze the trigger. Steady aim and an aggressive playstyle are essential, but if you can bring these to the table, our Einhorn Revolver build will make you the scourge of Blitz servers everywhere.

As promised, here is the best Vanguard Einhorn Revolving class.

The Einhorn Revolver is best up close, so everything we’ve done with it is boosting that potential. We’ve added the M97 Full Choke and SMLE Pistol Grip, a sweet combo popular with YouTubers that gets the pellet spread and aim just right. Then we boost the damage range with the 12 Gauge 5 Round Cylinder, which adds a bit of range to a loadout that can otherwise leave you pretty exposed at mid-range.

The Einhorn isn’t going to be exceptional at mid-range, but by adding the Fabric Grip, Klauser S2 stock you get boosts to both the hipfire and ADS accuracy. Generally you’ll be firing from the hip, but with the addition of the Slate Reflector, you have a nice clear optic to spam rounds at far away enemies. 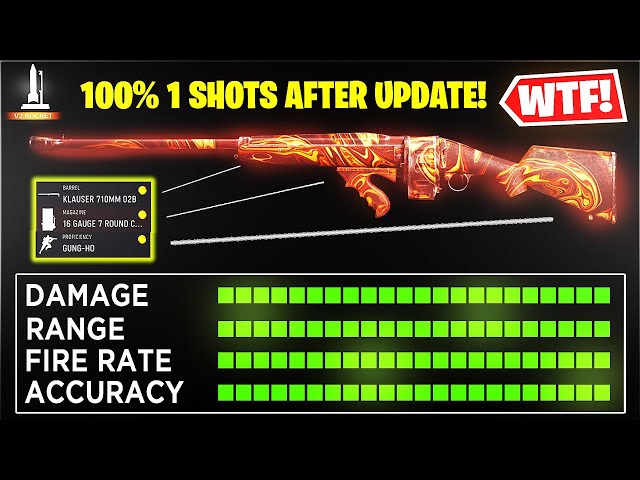 Then you have a choice to make. We’ve opted for Packed Power to increase the damage range. However, Buck and Slug will let you land one-shot body kills at a longer distance – although we’ve found it to be a little inconsistent sometimes – and Incendiary rounds won’t help you immediately, but can help you finish people off with damage over time after a successful shot.

Finally, there’s the Sleight of Hand proficiency and the Fully Loaded kit to ensure that you can reload as fast as possible and you also have stacks of ammunition.

Usually our weapon builds are perk agnostic – you roll with whatever you want and the builds will work for you. However, if you’re rolling with this Einhorn, you’ll want to take the following three perks:

Ninja means you won’t make as much noise as you sprint around the map, High Alert will give you a little vision pulse whenever anyone has you in their sights – potentially just enough time to hit the deck – and Double Time will let you just keep running. Combined, you’ll be lightning quick and almost impossibly lethal, providing you can play your angles right.

It’s unlikely we’ll see the shotgun meta come around in Warzone again, but this could realistically be a good option for the forthcoming Vanguard ranked mode. As that happens, we’ll keep the guide up to date and make sure you can keep fighting those naughty naughty MP40 players.