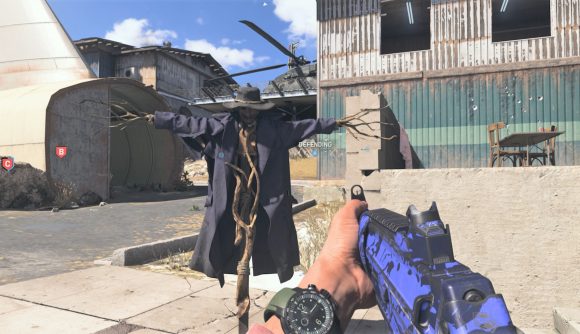 Call of Duty’s new Halloween-themed event The Haunting of Verdansk is full of terrifying new skins, operators, and game modes. While we’re still running scared from the zombies in Call of Duty: Warzone, there’s one thing that’s really given us the heebie-jeebies in Modern Warfare and that’s the scarecrows.

As part of the new Damnation playlist, which is essentially Domination with a spooky twist, flags are replaced with terrifying looking straw scarecrows. They have no face, but once they’re erected and you’ve secured the flag, they’ll spin round and round to face whatever direction you’re looking.

While that’s mildly unsettling in itself, it turns out these horrible looking strawmen can actually deal you some damage – providing, of course, that you do them harm first. According to a new post on Reddit, the scarecrows will retaliate and blow up if you deal them around 350 damage – that’s a couple of slaps with your gun barrel between you and me.

Once you’ve dealt enough damage, the angry scarecrow will hop up and down and then blow up like a big scary bouncing betty from the old days of Call of Duty: World at War. If you stand close enough, the little git will kill you, so be warned.

It’s a nice little easter egg and one that Infinity Ward clearly wasn’t anticipating fans to find so early on, but then again, the developer clearly underestimated how scary these things look and how much we want to smack them off the face of the earth.

Still, the Haunting of Verdansk event runs from now until November 3, so if you have formidophobia (the fear of scarecrows), you might want to avoid Damnation for a while.