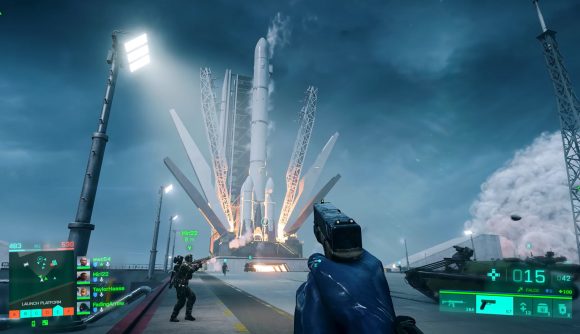 Ever since the screenshots of Orbital’s rockets started doing the rounds on social media, Battlefield 2042 fans have had one question on their minds and one question only: can you ride the rocket? Well, after sitting through a recent media briefing with the developers, we’ve got good and bad news for you.

For those blissfully unaware of how the rocket works in Orbital, let us explain. The map, although fairly big, is focused around a rocket launch site, where soldiers, vehicles, and aircraft come to play. Except in this levolution, the rocket launch sequence is automated and it’s up to players whether they allow the rocket to take off or destroy it – and the launch site – before it can take to the skies.

If the rocket doesn’t take enough damage during the six-minute launch sequence, it will take off, flying into the atmosphere. And if you’re stupid enough to be sitting on top of it, you too can join the crew inside – at least for a little bit.

In response to a question from IGN’s Jesse Gomez, level designer Kalle Nystrom says you can ride the rocket but “you can’t go into space.” Instead, you’ll be able to ride the rocket for a little while, but you’ll need to figure out when to jump off “before it’s too late.”

While next-gen technology certainly has allowed DICE to get creative with the traditional Battlefield sandbox, it clearly isn’t enough to take players into space. Still, we can’t wait to see some impressive mid-air shots from the beta with players sailing back down to earth from a quick trip to the skies.