Battlefield games have long featured levolutions – random events that change the landscape for better or for worse – and in Battlefield 2042 that is no different. If you’ve been keeping a close eye on the game’s trailers, you’ll know that Orbital features a gigantic rocket that both sides are fighting over in All-Out Warfare.

This rocket, which sits pretty much at the centre of the map, is programmed to launch automatically. Players don’t need to press any buttons or complete a complex easter egg to fire up the ship – they just have a choice: to let it fly off into space or destroy it. Neither choice helps or hinders a side – they simply change the landscape around the launch site.

However, one choice in particular really changes the layout of the launch site – and that’s to opt to destroy the rocket. It’s fairly easy to achieve once you know what you’re doing and results in a gigantic explosion that looks like it belongs in a Michael Bay movie.

So how do you blow up the Battlefield 2042 rocket on Orbital? Well read on to find out.

How to blow up the Battlefield 2042 rocket

As we’ve already mentioned, the launch sequence of the rocket in Orbital will begin at some point in the match without you having to do anything. You’ll know that the sequence has started when you see the fueling arms (the structure around the rocket) come away from the sides of the ship.

At this point, the rocket becomes vulnerable to damage for six minutes. Players can damage the rocket by shooting at it with weaponry, explosives, tank shells, and more. If the rocket takes enough damage during that six minute window, the entire thing will explode, forcing the tower and structure around it to collapse. The fiery inferno will also affect the launch platform and leave a crater where the rocket once stood. 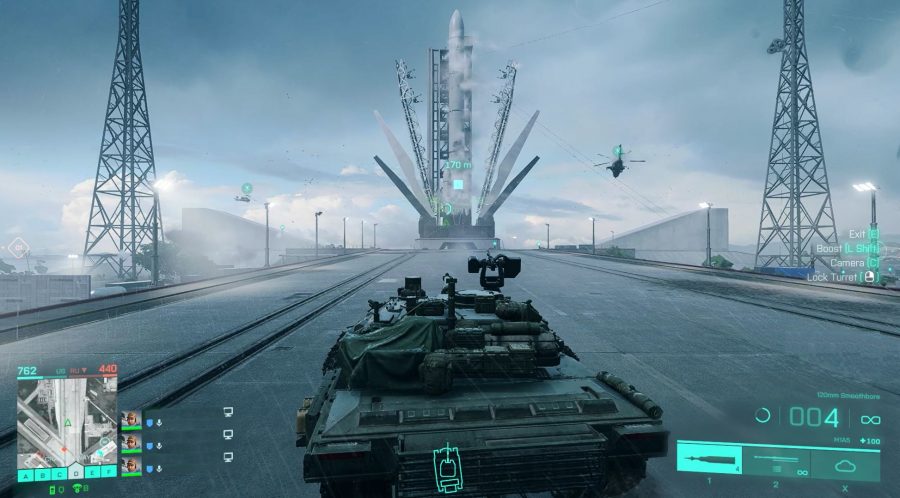 If the rocket does not take enough damage during that time period, though, it will take off without a hitch – and you’ll see it flying into space high above the battlefield. This option doesn’t create much carnage since nothing is really destroyed, but anyone at the base of the rocket or on top of it (yes, you can ride it), might be burned to a crisp.

It’s also worth noting that should you be lucky enough to witness a tornado during one of your Orbital matches that this force of nature will damage and destroy the rocket regardless of its launch status.