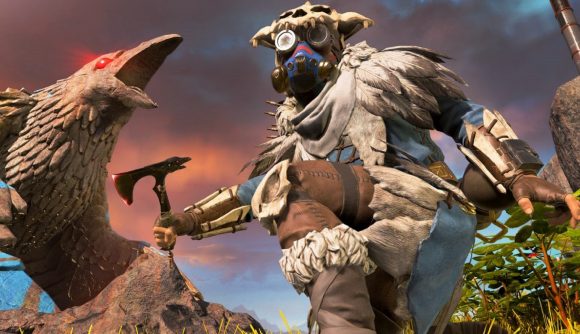 Players of Respawn’s battle royale game Apex Legends faced issues when trying to play on July 4, after a hacker caused a ‘save Titanfall’ message to show, playlist queue options to be locked out, and links to a ‘#SaveTitanfall’ campaign page to appear at the end of matches.

The people behind the campaign have stated that they’re not responsible for the hacking on their official Discord, despite being linked during the ordeal. The Discord’s admin writes: “I want to say that we are not the people/server behind the Apex situation and the messages you have seen directing you here, and we don’t know who it is.

“It appears that someone did want to spread the info about the Titanfall situation and we feel them,” they continue, “we want to play our game again as well. Our site is probably the best source of information packed into one place, so it’s probably logical they have selected that one to link with such a goal in mind. So please don’t be angry at us, those who are.”

After investigating the issue, Respawn claims the problems in Apex Legends have now been fixed as of the early hours of July 5, writing: “We’ve confirmed that matchmaking has been restored. We’re keeping an eye on things but believe the issue to be resolved.”

We’ve confirmed that matchmaking has been restored. We’re keeping an eye on things but believe the issue to be resolved.

Thanks for your patience, Legends.

Titanfall’s issues on PC have a long history. According to the #SaveTitanfall website, Titanfall 1 is currently “unplayable” and has been for “years” due to hackers using exploits in matches.

“To this day, Titanfall 1 is still on sale on Origin, and more recently Steam, even though it is unplayable,” it reads. “Respawn has been contacted about this matter numerous times in many ways. Even when the developers have been contacted, as soon as the topic of the Titanfall 1 problem is brought up, they stop replying.”

Respawn stated in May 2021 that it’s investigating “DDOS attacks affecting the Titanfall games,” with community coordinator Garza adding, “we are working on a solution, but this one will take time.” There’s been no further information about the investigation since.

Like Titanfall, Apex Legends players have reported an increase in DDOS attacks during Ranked matches. Respawn stated last month “huge steps are being made” to address the issue, while many top-ranked players were banned earlier this year in response.

It seems to be an ongoing problem across Respawn titles though, so we’ll have to see if this hack will prompt an accelerated response to counter these security issues.

The Loadout has reached out to Respawn for further comment.