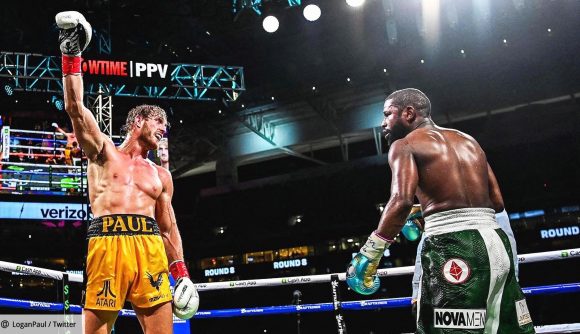 In what was quite easily the boxing event of the year – or yesterday evening, at least – YouTube star Logan Paul defended his 0-1 boxing record against undefeated boxing legend Floyd Mayweather.

Last night’s exhibition match – an eight-round feast for the eyes – saw Paul draw against his most difficult opponent yet in Mayweather, who held a perfect 50-0 record during his career, alongside world champion status in five weight classes.

With Mayweather’s experience and pedigree on full display throughout the fight, Paul’s spirited performance – at least in the early rounds – failed to yield results. The fighter only landed 28 of the 217 punches he threw (13%). On the other side of the ring, Mayweather only sent out 107 punches, but landed 43 of them (40%).

As the match went on, Paul’s 35lb weight advantage came into effect. Thanks to the star’s size, he was able to absorb much of the damage Mayweather was dealing out in the later rounds, as his stamina began to falter.

Absolutely proud of you Logan you did the impossible no matter what you have made it so far and I’ve seen it all proud of you this is a W pic.twitter.com/dZh3olpExz

With exhibition rules in effect and no judges to adjudicate, there could be no winner unless a knockout was achieved. While the match was eventually declared a draw, eagle-eyed fans have spotted what appears to be a knockout blow from Mayweather, who lands a mean right hook on Paul, sending him to the next dimension.

WHO COULD’VE SEEN THIS COMING: Many noticing Floyd Mayweather knocked out Logan Paul in this moment of the fight, but chose to hold Logan up instead of allowing Logan to fall. pic.twitter.com/VuU4iemG30

However, rather than letting his far heftier opponent drop to the mat, Mayweather holds Paul up until his soul can safely return to the Earthly realm, and the fight can resume.

In the post-fight interview, Paul declared that the opportunity to grace the ring with Mayweather is “one of the greatest moments of my life”. Mayweather meanwhile was pleasantly surprised by Paul’s performance, and says he had fun matching up with the content creator.

While Paul may be gutted to not have landed a knockout blow on Mayweather, he showcased that he was the real winner here before the match even started. Paul walked out last night with his BGS 10 black label first edition base set Charizard card hanging around his neck.

“This is a BGS 10 first edition Charizard,” Paul explains during the post-fight press conference. “It’s one of three in the world. It’s my prized possession. Ever since I got this graded as a ten, the momentum in my life has been crazy – this is my good luck charm.”

As one of the rarest Pokémon cards out there, and the only one to make it to a Floyd Mayweather fight, Paul now evaluates the card to be worth $1 million. Drippy.