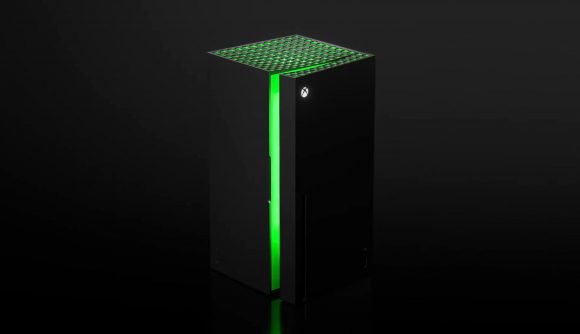 Starfield, wow! New Halo Infinite multiplayer news, yes! Brand new IP from Arkane, amazing! All of these announcements, trailers, and updates were mighty exciting during the Xbox and Bethesda E3 showcase, but just like a good Marvel movie, the best bits are sometimes after the credits roll.

For those who stuck around past the final montage, a bonus announcement was made. Microsoft has made good its promise to fans and is actually making and selling an Xbox Series X-styled mini fridge, and it’s available this Holiday season.

Earlier this year, as part of a #BestOfTweets campaign on Twitter, Xbox fended of confectionary brand Skittles in a public poll after Xbox’s marketing head Aaron Greenberg promised fans that Microsoft would literally turn the memes into reality and build a Series X fridge if it won the poll. Microsoft has periodically reassured fans that it will actually make the fridge, but now we have confirmation of when it will be available to buy.

The reveal shows off the design, and from the outside, it will be very hard to tell the console from the mini fridge. That is, until you open it up to reveal an Xbox-green interior, which will keep your bevvies cool with “Xbox Velocity Cooling Architecture”.

There was no mention of a price point, sadly, but to be totally honest, who bloody cares – XBOX FRIDGE IS COMING!!!

While this was absolutely, definitely, one hundred percent the biggest news of the entire showcase, we suppose the news about 27 new games are coming to Game Pass and all that stuff about the Halo Infinite release date was also pretty huge…