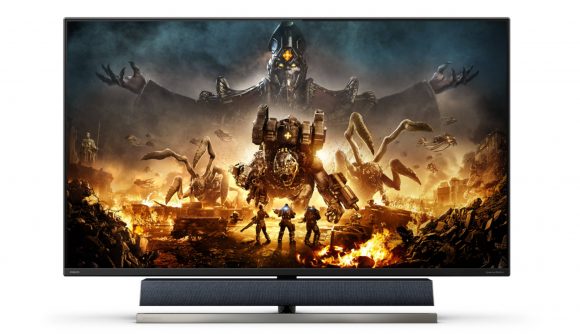 Current-gen consoles, or next-gen, or whatever else you like to call the PlayStation 5 and Xbox Series X|S, are finally starting to come into stock on a more regular basis, and us normal players are beginning to get our grubby little hands on the sought-after beasts for reasonable prices. However, when you’re plugging in your shiny new box – whether the black or white one – it’s only as good as the screen you’re using it on.

Here’s where Philips comes in, with the first ever Designed for Xbox gaming monitor. It’s a big boy, clocking in at 55”, so probably one for your living room rather than your office or gaming space, but the Philips Momentum 559M1RYV is purpose-built to accompany the Xbox Series X. Whether you’re ready to take your Xbox Game Pass games to the next level or eagerly waiting for the cinematic climaxes of the epic Battlefield 2042 maps, a quality display is a necessity.

Of course, it’ll work with the Series S, too, but the smaller console isn’t able to utilise the Momentum’s 4K resolution and 120Hz refresh rate. You need an HDMI 2.1 cable to make the connection between console and monitor, but that’s hardly an issue if you want the best gaming experience you can find.

The monitor also offers HDR support to get those colours really popping and Variable Refresh Rate to eliminate any potential screen tearing. Philips also boasts the monitor has low latency and low input lag, but it hasn’t released any numbers on those fronts. If you don’t fancy wearing a headset while you’re playing, the monitor also comes with a soundbar from British loudspeaker company Bowers & Wilkins.

“At Xbox, we’re always looking to give our fans choice in how, what and where they play their favourite games,” says Matt Kesselring, the director of hardware partnerships at Xbox, who also describes the combination of Microsoft console and Philips monitor as the “ultimate console gaming experience for Xbox Series X|S.”

Philips’ high-spec monitor won’t come cheap, but as is often the case with technology, you get what you pay for. For $1,599 (£1,199), you can get your hands on 55 inches of gaming goodness just in time for the Halo Infinite release date.