Xbox has unveiled its newest controllers and one looks like it would be perfect if you wanted to support everyone’s favourite esports site – us. Microsoft has announced the Electric Volt and Daystrike Camo Special Edition controllers, although in our humble, lime green opinion, you only need to look at the former.

While the red and black of the Daystrike Camo may be perfect for fans of FaZe Clan’s clean FIFA 21 kit, the Electric Volt’s specific shade of blinding green looks awfully familiar to us. Admittedly Xbox maintains that the Electric Volt has a “high-vis yellow top case,” however we vehemently disagree. To Microsoft, this may be a mere ‘yellow’ controller, but we recognise The Loadout’s signature lime green when we see it.

Picture the scene: Phil Spencer is sat in his garden shed like you or I. It’s a little known fact* that Spencer designs every single Xbox controller himself, from the bog standard pads that come with the stock consoles to the exciting themed limited edition pieces of kit that cost an arm and a leg. However, this was no usual design session, as Spencer was unusually bereft of inspiration for the new controller.

The board was demanding two new statement pieces for new wireless controllers, and he, Phil Spencer, couldn’t think of a single colour. Not one. “Ah, black,” he thought. Nope, used that for the Xbox Series X. He browsed the internet in frustration, angrily scrolling through articles on social media, his thumb red from the stress-scrolling. And that’s when he came across a new article on The Loadout dot com – we’re in his bookmarks, presumably – and inspiration struck.

We’re not sure which article exactly Phil was looking at when he realised that our site colours would be perfect for an Xbox pad, but we reckon he was probably reminding himself of all the games currently available on Xbox Game Pass – you can forgive him for not remembering every single one, after all. At the end of the day the details are irrelevant, he saw his inspiration and ran with it. 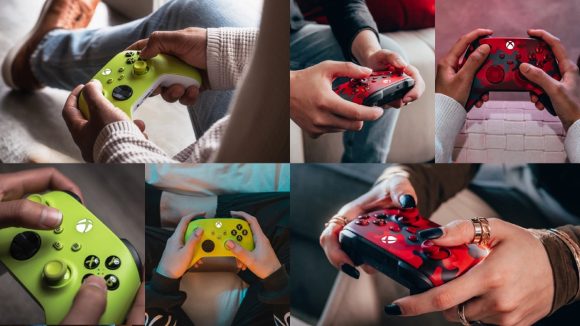 We can’t blame Phil for taking inspiration from yours truly – all the greats did it. Van Gogh was inspired to paint Starry Night while staring longingly from his bedroom window, Michelangelo was hit by some divine inspiration while painting the roof of the Sistine Chapel, and Andy Warhol was clearly awestruck by a particularly interesting banana when he was designing The Velvet Underground’s iconic album cover.

However, while we appreciate the sentiment, we’d also like to point out to Mr Spencer that you got the shade slightly wrong – you accidentally used what looks like #E5F746 instead of our iconic #BED730. Feel free to get in touch via email if you want to readjust the design now you know.

We had no idea that this was happening and are frankly disappointed that Spencer, or a representative, didn’t get in touch to arrange some kind of partnership over our shared love of lime green. We’ll be grabbing a few sets of the beautiful controllers when they launch on April 27.

*Definitely not a fact