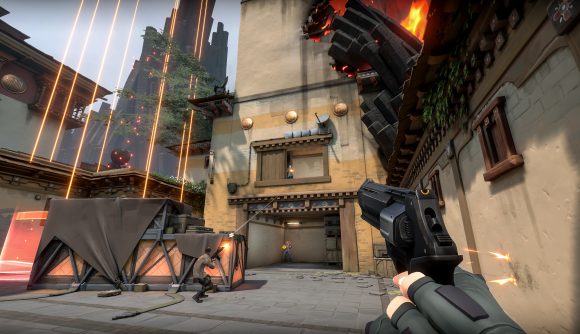 Gaming by yourself can be hard sometimes, but it looks like Riot Games wants Valorant to be as welcoming as possible. Following reports that a League of Legends developer was sexually harassed in the new tactical shooter, Riot Games says it is looking into new “long-term solutions” for tackling toxicity in game.

The discussion about toxicity started when a League of Legends UX designer known as Riot Greenily posted about her experience as a female solo queuing in Valorant (via Dexerto). She shared a clip on Twitter highlighting some of the harassment she experiences when giving call outs in games, and it’s something that echoed with Valorant’s executive producer, Anna Donlon.

“Gross, this is creepy as hell,” Donlon says in response to Greenily’s video. “This is why I can’t solo. I’m so sorry. We’re absolutely looking into long-term solutions for making it safe to play Valorant – even in solo queue.”

This isn’t the first time a female Riot Games employee has complained about toxicity in Valorant either. A few days ago, Valorant’s insight and strategy analyst, Riot Aeneia, had a similar experience during a Valorant game.

Today’s🍵: It’s like this MOST of the time on solo queue voice comms REGARDLESS of the game I’m playing. I usually don’t give in to this like in the video; I’m silent in an attempt to not incite more. Inevitably you get to a point where you have to mute them. More perspective: pic.twitter.com/7ruWcI78tL

Toxicity isn’t exclusive to Valorant. We know it plagues a number of other games, but finding a solution to it, especially for a game that relies on teamwork and communication, is going to be tough.

It’ll be interesting to see how the development team intend on tackling once Valorant’s new ranked mode is available.