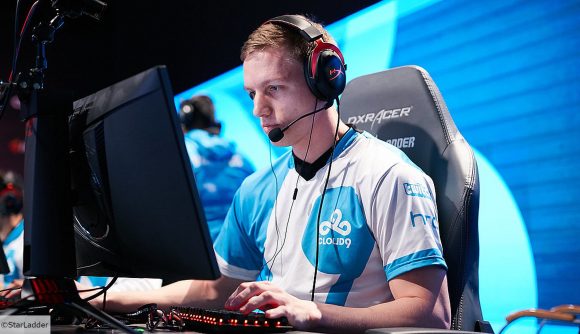 Tyler ‘Skadoodle’ Latham will again remain on the bench for T1 in the final Valorant Ignition Series event as he will be taking more time out to expand his agent pool. Taking to Twitter to address his recent absences, Skadoodle explained he will be back with T1 “when the time is right.”

Pop Flash is the finale of the Valorant Ignition Series, and gets underway tomorrow. It will be hosted by B Site, best known for the their Counter-Strike: Global Offensive tournaments. T1 are seeded sixth in the eight team tournament, and kick off against third seed Immortals.

T1’s coach Daniel ‘fRoD’ Montaner filled in for Skadoodle at August 16’s Pittsburgh Knights Gauntlet, prompting rumours that Skadoodle was on his way out. While his statement doesn’t offer a clear picture on when he’ll be back, it at least goes some way to dismissing those rumours and letting T1 and Skadoodle fans know that sooner or later, he’ll be returning to the team.

Skadoodle is a Sage specialist, and while the healer is still regarded as Tier 1 in the best Valorant agents, Skadoodle’s passive style as an Operator is on the way out; instead, duelists like Jett lead the way. During his time out of the team, it’s likely these agents Skadoodle will focus on when he talks about “grinding to expand my agent pool”.

I have been grinding to expand my agent pool and overall impact with the OP and will be back with T1 when the time is right, but in the meantime am going to be practicing with other teams to stay sharp. I'll be back soon and better than ever

T1 was one of the first major organisations to commit to competitive Valorant while it was still in beta, and Skadoodle switched from the Counter-Strike: Global Offensive scene to complete their roster.

Victor ‘food’ Wong has previously suggested Skadoodle was “holding [T1] back big time” in a leaked Steam message to Austin ‘crashies’ Roberts, so it’s clear not all is right within the squad. T1 fans will be hoping Skadoodle can step up to the plate on his return, but for now, another Valorant event is set to pass him by.