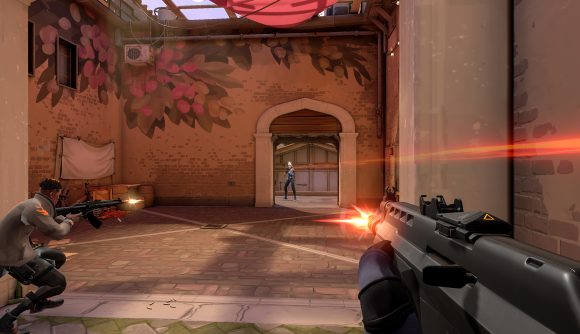 A previously cancelled gameplay capture event for Valorant, that would’ve seen a swathe of popular streamers and professional esports players get hands on with the game, appears to have been rescheduled for this weekend in an online format, according to reports.

Esports consultant and journalist Rod ‘Slasher’ Breslau claims that the capture event will begin today, March 27, and span the entire weekend until March 29. He reports that the games development team will show the game off to the invited players at the beginning of the weekend, before letting them loose on the game in order for them to gather footage for Valorant content. Any footage from the capture event is rumoured to be embargoed until April 3, so we can expect to see a flurry of content dropping then.

Slasher also suggests that the lifting of the embargo on April 3 will also tie in with an announcement for a Valorant beta. As the footage will be kept under wraps for a few days, the event is not going to be livestreamed on platforms like Twitch.

Riot’s previously scheduled Valorant gameplay capture event with big name esports pros, streamers, and youtube creators that was postponed due to the coronavirus will be happening as an online event starting tomorrow through Sunday, sources tell me https://t.co/DMMKYhXyD1

Slasher’s reports also coincide with the schedules of a number of streamers who have said they won’t be going live at points across the weekend. Ali ‘Myth’ Kabbani tweeted yesterday that despite wanting to stream he won’t be going live until March 30, while Tim ‘TimTheTatman’ Betar told his chat he will be “doing a thing this Friday” and will be cutting his stream on that day short.

Riot’s first crack at a first-person shooter has already generated a lot of hype – so much so that some organisations are already signing professional players for the game before it’s even gone to beta.

Previous releases of games such as Apex Legends have shown the impact streamers and content creators can have on establishing a title’s popularity, and there’s no doubt that that is what Riot are aiming to replicate with this event.