Riot Games has announced that a new mode called Snowball Fight will hit Valorant in time for the festive season. The limited-time mode will begin on December 15, and runs until December 29. Jumping into the mode will reward players with a Snow Bro gun buddy.

Players will take to the field with a modified version of Brimstone’s molotov launcher, which yeets lethal snowballs at opponents instead of fiery rounds. While you’ll have infinite ammo – we assume a tiny clone of Buddy the Elf is furiously making snowballs inside the chamber – the snowballs will have a hefty travel time, so be sure to lead your shots.

There are also festive power ups to collect, including a rapid fire upgrade, the “Growball” power which has the same effect as rolling your snowball down a snowy hill, Ricochet which can help you land some trick shots, and skates to improve your movement and jumping capabilities. Honestly, it sounds like the perfect chilled-out alternative to Valorant ranked.

According to Valorant’s senior game designer Bobby Prochnow and senior producer Jared Berbach, the team has been focusing on “lower stress, lower focus modes” to provide an alternative to the fast-paced and high-stakes standard game.

“Valorant has very little chill,” admits Prochnow, which is something to be expected from a highly competitive game, but can become a bit full-on if it’s the only mode available. That’s how the festive Snowball Fight mode was born – filled with presents to unwrap and fun skills to enhance the 5v5 deathmatch mode with some much-needed levity. 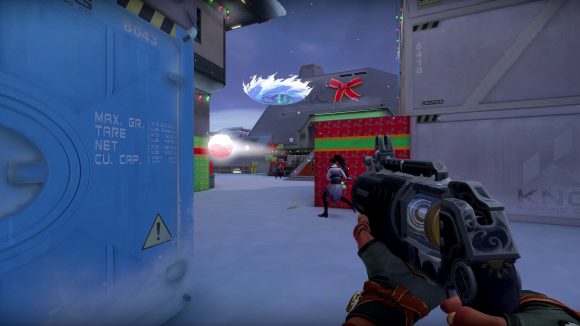 Berbach says Valorant developers will focus on low-stress game modes for the first half of 2021, as they “want to provide places where players can wind down after a long session, or simply hang out with their friends of all skill levels to have some casual fun.”

Valorant has been nominated for Esports Game of the Year and Best Multiplayer Game at the Game Awards, so Riot will of course also be focusing on the main game mode and esport as we head into 2021.