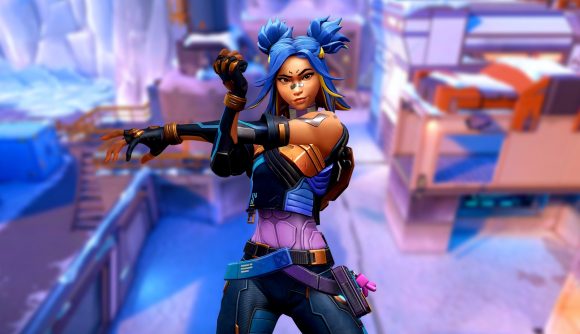 We all know that streamer and pro esports players Michael ‘Shroud’ Grzesiek is good at first person shooters, but the latest viral clip showcasing his skill really is next level. Days after the news broke that the Sentinels Valorant team has signed Shroud, he was clipped on Twitch hitting a triple round-winning wallbang on Icebox – one of the more popular Valorant maps – with a Vandal.

In the short clip, which you can find on Shroud’s Twitch channel here, Shroud is engaged in a 3v3 while his team is up nine rounds to seven. It’s far from what you might consider a battering, but watching Shroud’s clip in isolation would make it seem like his team should be nine for nought.

Why? Well, because he dispatches all three of his opponents with a wallbang – which basically means he’s shooting them through a wall without seeing them. If we didn’t know just how talented Shroud was, we would look at this clip and think he’s hacking – we’re not joking.

We know this sounds almost too outrageous to be true, so why don’t you check it out for yourself below if you don’t believe us.

For all the Valorant fans who have been eager to see former CSGO pro Shroud showcase his skills in competitive Valorant, this clip might just be a great look at what’s to come. This isn’t his first foray into competitive Valorant, as you may already know, but it’s sure to be his most prolific and this clip is also proof that he’s very much at the top of his game right now.

If you fancy yourself a trick-shotter, why not jump into Riot Games’ tactical shooter ahead of the Valorant Episode 5 Act 1 end date and showcase your skills. If you’re just starting out, here’s a guide on how to convert your CSGO sensitivity to Valorant – this should help you get started.