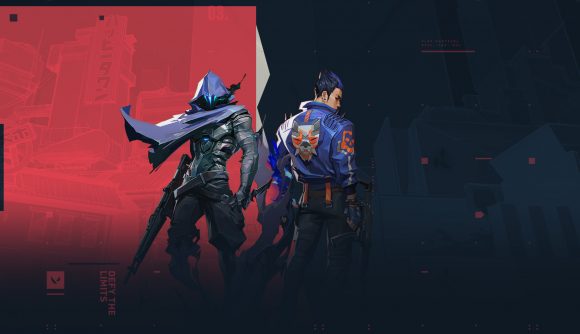 Valorant has had its share of peculiar bugs, not least the recent case of the disappearing Yoru which saw the FPS game’s latest agent phase through the floor if he teleported at a certain time. Riot has been furiously squashing these annoying little blighters, with much of Valorant patch 2.02 focusing on the work that’s going into keeping the game bug-free. However, the most recent patch also appears to have let a particularly nasty beasty wriggle free, much to superstar streamer Michael ‘Shroud’ Grzesiek’s bemusement.

In a clip taken from Shroud’s stream, we see him in a tense 1v1 situation – mano a mano. With 30 seconds left on the clock, the former Counter-Strike: Global Offensive pro is sat defending Haven’s C Site. The enemy Cypher takes a few shots at shroud as he peeks, revealing his location on the minimap. However, whereas Cypher’s minimap icon would usually disappear a couple of seconds after leaving combat, it remains visible to shroud, allowing the streamer to easily track his foe’s movements around the map.

Although many of Shroud’s viewers were miffed by the game-breaking bug, it appears to be one he has encountered before, as he calmly states “I’ve got the bug, I see him.” The clip ends with the unfortunate Cypher trying to plant the spike in the round’s dying moments, before Shroud boldly reveals himself to his opponent. Rather than completing the plant, the Cypher attempts to make a play on the streamer. However, utilising Yoru’s ultimate, Shroud becomes invisible, allowing the clock to run down before the Cypher can locate him.

The full clip can be seen below.

Although it is unclear what causes the bug, its existence gives players a huge advantage. With Valorant Champions Tour’s open qualifiers currently underway, Riot will be keen to remedy this issue quickly before it occurs in an official match.