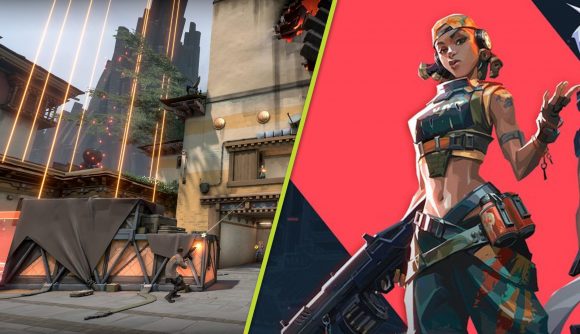 There have been lots of map changes to Valorant in recent times, with Fracture and Icebox being the latest maps to receive some tweaks. Talking about what’s to come for Valorant’s maps, the map design team have spoken out on whether the game is likely to receive new maps or alternate versions of existing maps set at night. Unfortunately, it isn’t looking like we’ll be seeing any starry skies in Valorant anytime soon.

In a Reddit AMA, Riot level designers Joe Lansford and Joey Simas and lead environment artist George Sokol made themselves available to answer Valorant community questions. “With the latest Icebox changes coming out, the Maps team thought it would be a good time as any to catch up with you on our seven maps,” they say in the post. “We are here to answer any questions about the latest Icebox changes, the relatively recent Fracture changes, and anything else you might have for us.”

Reddit user ‘Rabger_’ asks whether there would be any nighttime map variants coming to Valorant. The answer isn’t clear cut, but the devs do explain how a night map’s introduction will affect gameplay. “As far as nighttime maps goes, maybe someday?” Sokol replies. “Artists always love making stuff at night time, but it’s a tricky balancing act to make a map look like night but also have enough clear visibility for gameplay.”

So, while the answer to whether Valorant will get night maps isn’t a definite no, it seems unlikely that they will appear in the multiplayer shooter anytime soon. Their introduction will have to be carefully considered, seeing as it will affect aspects of gameplay like player visibility, which could lead to issues in competitive and pro play.

The latest Valorant patch notes brought some significant updates to the game’s Agents and maps, but they also introduced bugs, too, like the Cypher exploit that caused whole multiplayer matches to crash. Riot have been quick to fix these issues, and judging by the AMA, they are keen to stay on top of community feedback.