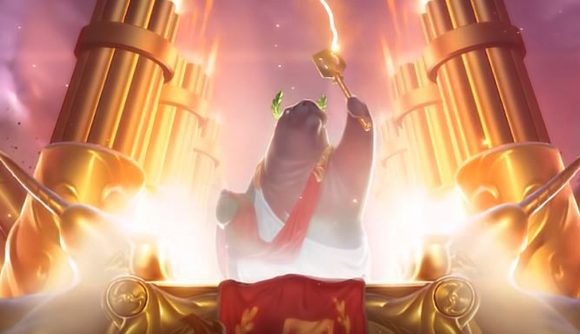 With Valorant’s main selling point being competitive integrity and accuracy, we learnt in the recent barrage of information following the game’s official reveal that there will be no character skins at launch for the game’s agents, probably due to camouflaging and hitbox concerns. Boo.

But then Riot revealed that there’ll be loads of unlockable and purchasable cosmetics for your weapons. Yay. And according to a video by IGN Nordic’s Nick Nijland on his YouTube channel, one such set of weapon skins will pay homage to one of League of Legends’ most loved modes and biggest jokes: URF.

That’s right, there will reportedly be URF-themed weapon skins added to Valorant that will celebrate Urf, the Manatee and the ridiculous mode of which he is the mascot. Nijland says in the video that Riot had informed him that URF skins would be coming to the game and that players can expect some “crazy weapon designs” coming to Valorant. While it is not confirmed whether these skins will be directly manatee-based, they will apparently have some kind of reference to either Urf or the mode itself, and will apparently be modelled around Nerf guns – as you would, with wordplay as fantastic-sounding as ‘URF Nerfs.’

Nijland also reports that there will be weapon charms, similar to those you see in games like Call of Duty: Modern Warfare, which might be a more suitable way of incorporating a spatula-wielding manatee into cosmetic items.

Cosmetics in Valorant can either be earned by completing challenges and ranking up specific agents, or purchased in the store using Riot Points, but there will be no lootboxes. Huzzah.

While Riot have explicitly said that the worlds of League of Legends and Valorant are separate, ten years worth of LoL has created just two many easter egg and crossover opportunities for RIot to pass up on.