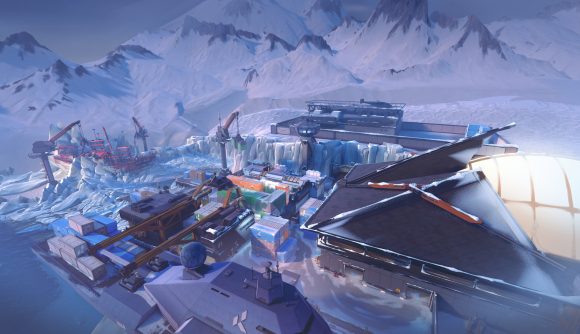 Ah, Icebox, once the least favourite Valorant map. On release, fans took issue with its large size and verticality, which made play pretty difficult. But since then, Riot has chopped and changed its frosty landscape to provide a much better playing experience – and it’s now been beautifully recreated in Unreal Engine 5.

Redditor ‘Ravoux’ shared the video online, which starts by showcasing the watchpoint above Attacker Side Spawn. We then follow the crunchy ground textures briefly, before they give us a peek at the crates and storage containers that line Mid. From there we get a shot rising above Mid Boiler into the Defender Side Spawn, before a full sweep through Mid shows off the lighting from Tube and the neon logo at the top of it.

Needless to say, Ravoux’s efforts are incredibly impressive, and this more realistic-looking Icebox certainly wouldn’t look out of place in a Bond film. So impressive is the Redditor’s work, in fact, that it has even caught the eye of Valorant’s head of marketing video production, Nathan ‘R3DALERT’ Hower.

Ravoux says that it took two weeks to remake Icebox, “from gathering references, modelling, texturing, and the editing.” For those who wish to try and recreate the creator’s workflow, they say that they used Maya for the buildings, Substance Painter for the textures, and Quixel Bridge for the organics.

Icebox isn’t going to be the end of Ravoux’s efforts, as the Redditor has announced that they’re planning to bring the other Valorant maps to life in Unreal Engine 5 – we’re hoping for Ascent next.