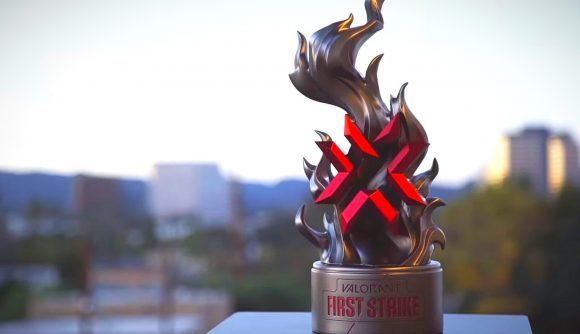 The winners of the 18 regional finals for Valorant First Strike have been decided, with arguably the toughest battleground, North America, being conquered by 100 Thieves.

First Strike, which is Riot’s first in-house tournament series for Valorant after months of grassroots, third-party competitions, dished out over $600,000 of prize money across all 18 finals events this weekend. The Major regions of NA, Europe, and Korea got the biggest prize pools though, with $100,000 each spread out across competitors.

Despite not dropping a map en route to the final of the North American competition, TSM were taken down 3-1 by 100 Thieves, which has former Counter-Strike veterans Spencer ‘Hiko’ Martin and Nicholas ‘nitr0’ Cannella on its roster. In Europe, Heretics completed its remarkable run with a victory in the final against SUMN FC. Heretics took down the two biggest names in European Valorant, Team Liquid and G2 Esports, to reach the final.

Over in Korea, Vision Strikes hoisted the First Strike trophy, toppling Cloud9’s Korean roster on its way to the final.

You can find the full list of winners from every region right here.

Riot’s show of faith in Valorant as an esport, despite being released just this summer, appears to have been warranted with most regions posting respectable viewership numbers relative to their sizes.

With two of esports’ biggest names in TSM and 100 Thieves, it was the NA final that topped the charts for viewership, peaking at 300,000 viewers across all streams according to Esports Charts Pro. These numbers were helped by two of Twitch’s biggest streamers co-broadcasting the final on their channels in support of each of the final’s teams: Ali ‘Myth’ Kabbani for TSM, and Tyler ‘Ninja’ Blevins for 100 Thieves.

The next competitive Valorant action will not be until early 2021, when Riot kicks off its year-long Valorant Champions Tour, which will culminate in a cross-region world championship at the end of next year.