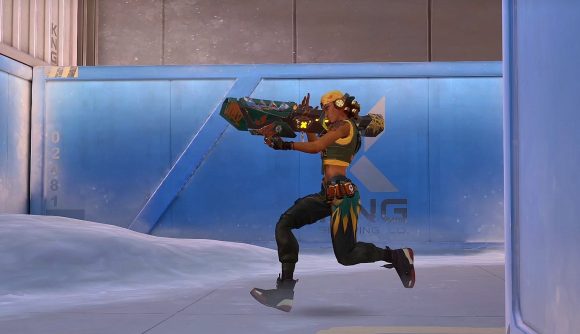 While competitive players will toil away for hours trying to climb the Valorant ranks, there is also a community of more casual players that Riot Games needs to cater to for its tactical shooter. The best way to keep those players entertained is with a new game mode, and that’s exactly what they’re getting tomorrow.

Escalation is its name, and if you’ve ever played a ‘gun game’ mode where you work your way through a list of increasingly powerful weapons, it’s essentially that – but in reverse. This 5v5 respawn mode gives teams a randomly created set of 12 weapons to cycle through, and you’ll start with the perceived strongest class. As a team, you need to earn enough kills and points using a weapon to progress to the next one. But the emphasis on this being a team mode, rather than some form of free for all, is where things get a tad complicated.

Whichever player gets the kill that tips the team over the amount of points needed to progress will immediately see their weapon change into the next one in the cycle. Anyone else on the team that has contributed to that point total will see their gun change within the next five seconds.

However, for anyone sitting at the back letting their teammates do the work, things won’t be as simple. If you fail to contribute to that round’s points tally, your gun will not change to the next one in the chain.

Once you manage to get a kill, though, you will then move on to the next level. But if you’re slacking, be warned: you’ll still have to go through all 12 weapons even if your teammates are ahead. In other words, don’t expect to get carried here.

There is one exception though, and that’s the final level where the perceived weakest gun in the set will come into play. As soon someone hits that final level, all the players on that team will get that gun, even those lagging behind.

Show your skill with every weapon in the new Escalation game mode, playable tomorrow. pic.twitter.com/Odv6PA6rNQ

The goal is to then get enough kills with that final weapon, and you’re crowned the winner. Alternatively, you can win by having the most points when the match timer hits ten minutes, as that’s the maximum length of a game of Escalation.

While on paper it may look a tad confusing for a casual mode, players should pick this up relatively quickly. It’s also a great opportunity to test out weapons you’d normally avoid and try to clutch up at the end using some of the worst weapons in Valorant.