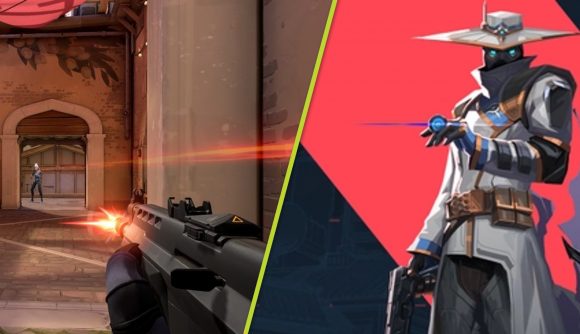 March 4, 2022 The issue that caused Valorant matches to crash when Cypher performed abilities in Hookah on Bind has now been fixed by Riot, and Cypher has been reinstated for ranked play.

Just a day after we reported that Valorant’s Yoru was disabled from ranked play after his recent rework, likely due to a bug that allowed them to plant the bomb while ulting and thereby making him invincible, they have now been fixed and Riot Games has reinstated the agent for competitive play.

Alongside this, Agent Astra also returns to ranked after a bug that allowed her to sell her starting star. But that’s not the end for Valorants recent bans, as another character has now been sidelined due to a new glitch.

The popular Valorant reconnaissance specialist Cypher has now been disabled in ranked play following reports of a server-crashing glitch that happens if you use his Trapwire ability in the hookah room on the Bind map. The bug is triggered simultaneously when Cypher’s Trapwire is triggered, and it causes the server to freeze and kick out all players in the game.

The evidence for this comes in the form of a video uploaded to Reddit, which depicts the Cypher player walking into Hookah before the server crashes and players are frozen in place. The poster elucidates their experience in a follow-up post, stating that the glitch isn’t a one-off occurrence.

“Both games I’ve played today on bind, when someone on the enemy team enters the trip, their character model walks through the trip without it activating and It causes the server to malfunction, kicking everyone out,” Reddit user ‘alyle11’ explains in a comment on the thread. “I’m assuming this is due to the changes made to Cypher’s trip where they addressed enemies walking through a diagonal trip without it activating on rare occasions. It’s happened twice today in identical fashion, I recorded it the second time. Also not sure if this is related in anyways: both times it was an omen walking through the trip.”

The latest Valorant patch notes detail lots of significant changes to the game’s playable agents, and it seems that this update introduced some unexpected glitches. The good news is that Riot seem to be on top of the bug reports, disabling, fixing, and reintroducing Agents within a day or two of reported issues.