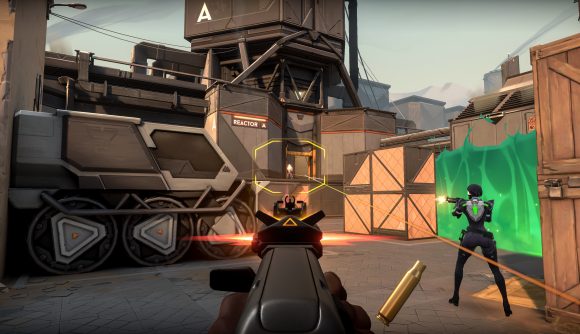 When it comes to hard peeks and aim duels, Counter-Strike: Global Offensive players are some of the best in the business. But if there’s one thing we’ve learned from the past three days of closed beta access, it’s that you’re going to need much more than good aim in Riot Games’ new tactical shooter, Valorant.

Michael ‘shroud’ Grzesiek, Jaryd ‘summit1g’ Lazar, Tyler ‘skadoodle’ Latham, Erik ‘fl0m’ Flom, and Coby ‘Dizzy’ Meadows got together last night to take on some of the Valorant developers in a unique showmatch that brought the brains of the game against some of the best professional players out there. And, well, it didn’t go very well for the streamers.

The developers knowledge of the game, the agents, and its meta was no match for the streamers. Riot’s team stomped to victory over two maps, only allowing the streamers to win five rounds out of 31.

It was a tough loss for the streamers, who predicted they’d have a hard time before the match, but it only goes to show that the very best will need to spend lots of time working out how best to use the agents and their abilities – especially Raze.