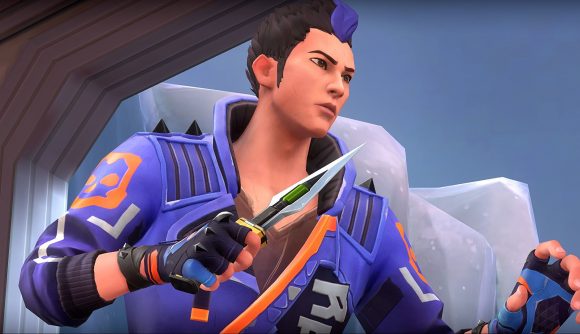 Valorant’s new military-inspired Recon skinline was announced yesterday, and with it came a pleasant surprise – especially for long-time tactical FPS game players – in the form of a balisong, or butterfly knife, skin for the melee. The skin features some pretty sweet tricks as part of its animations, which one Redditor has recreated in real life.

Shared on Reddit by user ‘hehethatfuny’, the balisong enthusiast seamlessly mirrors the clip of Yoru flexing his skills in-game – and it’s mesmerising. As the player slows down the combo so that we mere mortals can keep up with what’s going on, they list off each trick that Riot has integrated into the skin: a Behind the 8 Ball into an Index Rollover, Whip Rollover, Shortstop, and finally a Backhand Close.

It certainly seems that Riot’s design intentions have hit the mark here, with players already emulating the animations. Valorant’s art lead Sean Marino says that the skins team took inspiration from real world demonstrations of butterfly knife tricks and how other games have used them in order to delve into the balisong experience.

You can check out the impressive clip below. hehethatfuny says that they trained with a trainer – a blunt knife – for the first year of their balisong-flipping career before switching to a live blade. If butterfly knife tricks are something you’d like to get into, we’d definitely advise going down this route. Safety first.

I replicated the ButterflyKnife combo IRL from VALORANT

If you want to know what knife hehethatfuny’s using to achieve these tricks, then you’re in luck. The player says that it’s a Squid Industries Krake Raken, which can go for anything from $250-$300 – so it’s going to cost you an arm and a leg… or a finger.