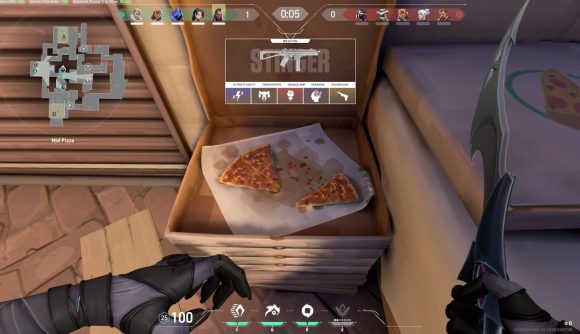 Some Valorant players have expressed concerns over an extremely important part of the game that they feel is not up to scratch – the pizza in Ascent. In a post on Reddit by riversglhf, the case is made that the open pizza box found in the Mid Pizza area is unappetising.

They explain that the map is set in Italy, which “is so quintessentially Italian that a non-profit was established in 1984 just to ensure that all pizzas claiming to be Neapolitan in style uphold the true virtues of the cuisine.” He goes on to explain that the presence of steam emitting from the pizza suggests that the pizza shouldn’t look as old or unappetising as it is, before concluding that “it still looks like a dehydrated husk of dough and dollar store mushrooms.”

It seems that lots of people agree, with over 200 comments and 96% upvotes, with several comments calling out the injustice of this slight on Italian cuisine. riversghlf is likely addressing the community rather than demanding from Riot themselves change the pizza because of the Direct Address rule that’s detailed in the subreddit’s rules.

This is not the only thing players have noticed in Ascent, as the map also has a park bench with a Tahm Kench easter egg that’s a nice nod to League of Legends.

To their credit, yes, the Ascent pizza looks proper minging. I can see pepperoni, minced beef, and what could be either a small scattering yellow peppers or tiny squirts of American mustard. It’s a crime against food.

But, dear Valorant community, I,  Dave Irwin, have a proposition for you. I’ve just received delivery of a pizza oven! However you might have to wait for the weather to be a little less wet. While you wait, have a look at the current Valorant agent tier list and play some games. I’ll call you when the pizza is ready.