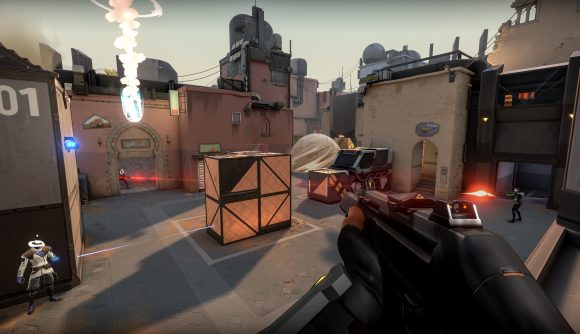 Riot Games is launching the first set of APIs for Valorant today and talented fans can start pitching their ideas for the FPS. An API (or an application program interface) lets players take aspects of the game into their own hands to tinker with – but only successful pitches will get access at this time.

There are a bunch of guidelines and rules that Riot has sensibly put in place, along with details of how limited the production keys are going to be. Due to this just being the launch, the blog post from Gene Chorba who’s part of the senior developer relations team, says Riot is “going to be fairly discerning about which applications get production keys”.

The post has a bunch of things you should not use Valorant data for – those that do these things will have their “application yeeted straight into the sun”. Riot’s words, not mine. Pitches shouldn’t include “personal profiles, scouting tools, guides based on individual players, or personalised data of any kind, unless an individual player chooses to share their data”. This is apparently because Riot wants players to own their own data and do with it as they like.

The other big no-no is that you shouldn’t pitch any direct substitutes for any in-game queue system. “If it directly competes with the incentives to play in any in-game queue or impacts game health, we’re not going to provide resources to support it,” the post says.

Although there are a lot of things you shouldn’t try to achieve with the data they can provide, Riot does want to encourage you to “think outside of the box of what is possible” when shooting your shot. “Send us your moonshots, your big ideas, be ambitious, and if we think you can pull it off, we’ll be in touch with you to go over the fine details and help you make it happen. Send in your application on Developer.RiotGames.com and be as clear as possible about what you are building and what you need data access for.”

Sounds like Riot can’t wait to see what their fans have in mind for improvements, so if you can think of changes you’d make or features you’d add, why not give it a go?