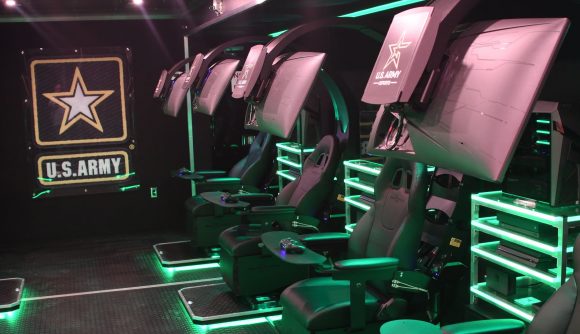 The US Army’s Twitch channel has agreed to unban all players who had mentioned, asked about, or linked to online articles regarding war crimes committed by the US military. The reversal comes after Columbia University’s Knight First Amendment Institute took up the cause of Jordan Uhl, an online activist who criticised the esports team’s recruitment tactics for The National.

Both the Army and the Navy have written to the Knight Institute, agreeing to unban Uhl and all others impacted by similar bans. The Navy’s letter explains that Uhl had been banned for spamming, having written several similar messages over a few days, but that he would be unbanned as “as a gesture of good faith”. The Army’s letter was significantly shorter, simply confirming Uhl was no longer banned.

They have since confirmed that they will be reinstating everyone who has been affected by the bans, and that they are “reviewing and clarifying its policies and procedures for the stream.”

While Uhl was officially banned for linking to Wikipedia articles of US military war crimes, he explains in his piece for The National that the aim wasn’t just to highlight the atrocities of the military, but to pushback on the ways “the US military are spending hours with children as young as 13, trying to convince them to enlist.”

New York Congresswoman Alexandria Ocasio-Cortez has expressed similar concerns, telling the House “These are not educational outreach programs, but recruitment forms for the military.” Ocasio-Cortez tried to introduce a bill which limited military funding for the esports wing, but it failed 126 to 292. She took to Twitter to vent her frustration and the technological illiteracy of the House of Representatives.

The US Army Esports team’s official stance is that they are not a recruitment agency, but their actions tell a different story. A US Army source tells PCGamesN “the majority of the budget allocated to Army Esports is spent on travel and lodging for recruiters and leaders to attend key gaming events – the ones identified as the likeliest and richest sources of leads for potential recruits. They say that in the 18 months since Army Esports launched, it’s generally only been recruiters and social media managers who have traveled to gaming events”

Regarding the recent unbanning of Uhl and everyone else, the Knight Institute’s full statement can be found below:

“We’re pleased that both the Army and Navy have agreed to unban users who were banned for engaging in core political speech. It’s also good to see that the Navy is committing not to ban users on the basis of viewpoint. Of course, it matters how these new policies are applied. We will monitor the Navy’s practices closely to ensure that the new policies are enforced consistently and in a viewpoint-neutral manner. We look forward to reviewing the Army’s policies once they are posted.”