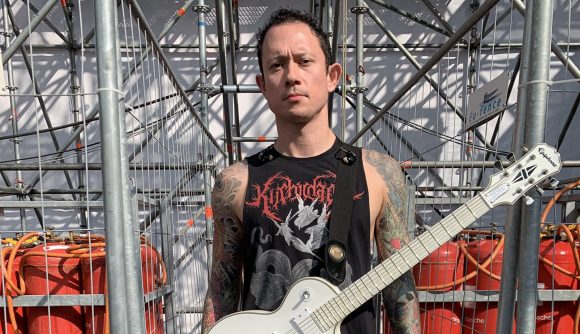 Trivium should be playing concerts in Asia right now, but because of the coronavirus pandemic, their tour got cancelled. Instead of hunkering down and wallowing in self pity, the band’s front man, Matthew Heafy is playing the full tour setlist over on Twitch.

The frontman isn’t new to Twitch. Heafy has been streaming on and off in the Music and Performance Arts section since 2017, but in the wake of the pandemic and the strange social situation we all find ourselves in, Heafy has decided to host “makeup” sessions for the lost tours in Japan, Singapore, Thailand, and Indonesia.

And it’s going pretty well. So far, in the last week alone, Heafy has played the full set lists for Ascendance, Knotfest, and Shogun, and it’s proving pretty popular. According to Twitch Tracker, Heafy had an average peak of 1,341 viewers in the last week.

While that number is considerably lower than the crowd he and the rest of the band would have amassed in Asia, it’s good to see the frontman engaging with his fans in chat and hopefully putting a smile on their face in this strange time.

The Trivium man isn’t the only one flocking to streaming platforms to entertain the masses at the moment though. Marc Rebillet is hosting solo sets, DJ JSTR is back on Twitch, and Mija recently released her streaming schedule.

Michael Olson, the head of music at Twitch, wrote on LinkedIn recently that a number of musicians and organisations had been in touch to find ways to connect with their fans. It seems like the majority of artists are using Instagram at the moment, but expect some to transition to Twitch in the coming weeks, as many look for new ways to interact with their fans from the comfort of their own homes.